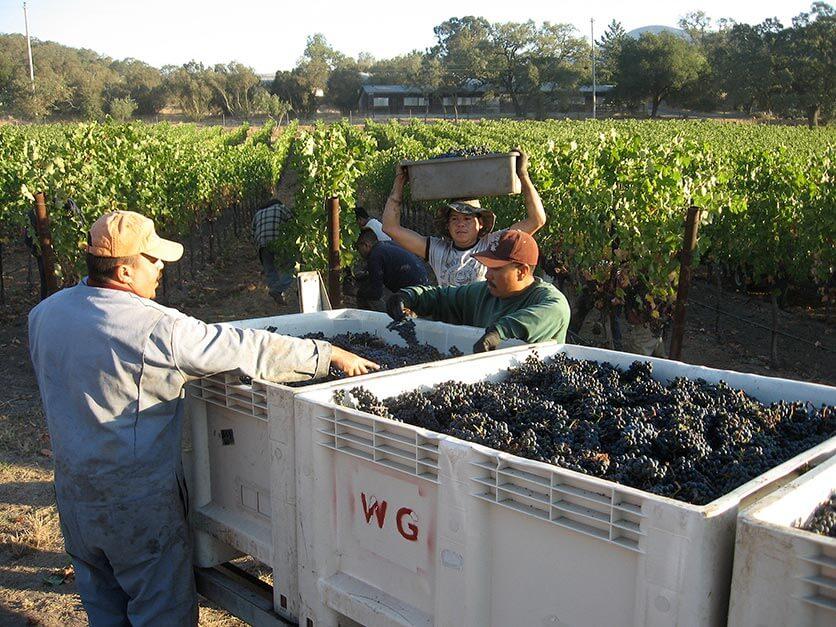 Former football standout and longtime supporter Hank McCrorie followed a successful career in sales with purchasing his own vineyard that provides wine to a variety of restaurants and fine wine shops in 23 states.

Hank McCrorie is the owner of Burly Wine, a boutique wine that is available at a variety of restaurants and fine wine shops in 23 states. Known for its bold, intrinsic flavors of tannins and oak, Burly produces around 2,000 cases of wine annually. The name Burly originates from McCrorie’s days playing football at Lenoir-Rhyne when he was dubbed Burly Bear by the Charlotte Observer. “The nickname Burly was the result of a picture that was published prior to Lenoir-Rhyne playing Appalachian [State] in football,” McCrorie said. “They called me Burly Bear in the caption. It caught on with a lot of my teammates and has stuck for life.”

Before McCrorie’s adventure in winemaking began, he served a 40-year career with Pzifer, retiring as executive vice president of sales. His work with the company entailed weekly commutes from Charlotte, North Carolina, to New York City. He credits Bernice with taking care of both their mothers during this time, and one of the ways he thanked her was by building the dream home she always wanted in Napa Valley. During the process of building, McCrorie was presented with an opportunity to lease a nine-and-a-half-acre vineyard of Cabernet Sauvignon from the Simpkins’ Ranch, owned by Cliff and Joan Simpkins, in the Coombsville American Viticultural Area.

“I had gained an appreciation for small production Napa Valley Cabernets while visiting New York,” McCrorie said. “When I discovered the sale included a fourth-generation Italian winemaker and vineyard manager, it seemed like a package deal I couldn’t resist.”

Massimo Monticelli is Burly’s winemaker. He spent his early career at the Cabernet winery Silver Oak producing high-end wines before leaving to focus on smaller boutique labels. He and Michael Wolfe, vineyard manager, work together to enhance the unique environment of the Coombsville region. Wolfe directs the quality and health of the vineyard, while Monticelli guides the winemaking process to ensure the fullness of each grape is expressed.

“Burly Wine embodies the Burly Vineyard terroir,” Monticelli said. “The vineyard soil is rocky loam which provides good drainage and low nutrient concentration. We are located in an area where the climate is generally cooler than other areas in the Napa Valley which allows the grapes to hang on their vines for a longer amount of time. This promotes intensified flavors and layering in the finished wine.”

Burly has received numerous scores of 90 and above (a score of 90 or above is considered outstanding) by Wine Spectator and won a national award for its label design which features the image of a live oak tree. Bernice, who was instrumental in helping design the label, says the oak is reminiscent of the trees she played in as a child and the Southern oaks her husband grew up around.

“A big part of the fun I had as a child involved climbing in the 13 live oak trees my parents had on their ranch in northern California,” Bernice said. “Hank is from the South, where there are also big oaks, and I thought the tree’s image would be a great way to bond our childhood roots, so to speak.”

For McCrorie and his wife, Burly has provided a way to stay connected with their friends, family, and the LR community, as they use it to spread cheer and help shape special moments. McCrorie regularly hosts Burly Wine dinners in cities throughout North Carolina, and he has donated wine to LR for use at special events. Since Burly’s first vintage of Cabernet Sauvignon was produced in 2004, the vineyard has added production of a Chardonnay and Sauvignon Blanc, increasing the variety in Burly’s collection of tasting options. According to McCrorie, Burly is regularly sold to National Football League owners and professional athletes, including LeBron James, who has posted about Burly on his Instagram account.

While McCrorie’s distribution list may include a number of celebrities, many LR alumni including Ed Byrd ’69, have been sipping the wine since it was introduced to the market. “Hank’s wine Burly always brings joy to our table,” Byrd said. “It tastes like candy.”

With a passion for traveling, alumna Chrissy Elliott has been to travelled to 55 countries, 47 states and five continents in the last 25 years – and has no plans on slowing down.

Relive the last 100 years of LR football with “Bear Nation: Between the Bricks” – an illustrated coffee-table book by writer and archivist David O. Stephens '69.