Photographing presidents, alum got his start at LR 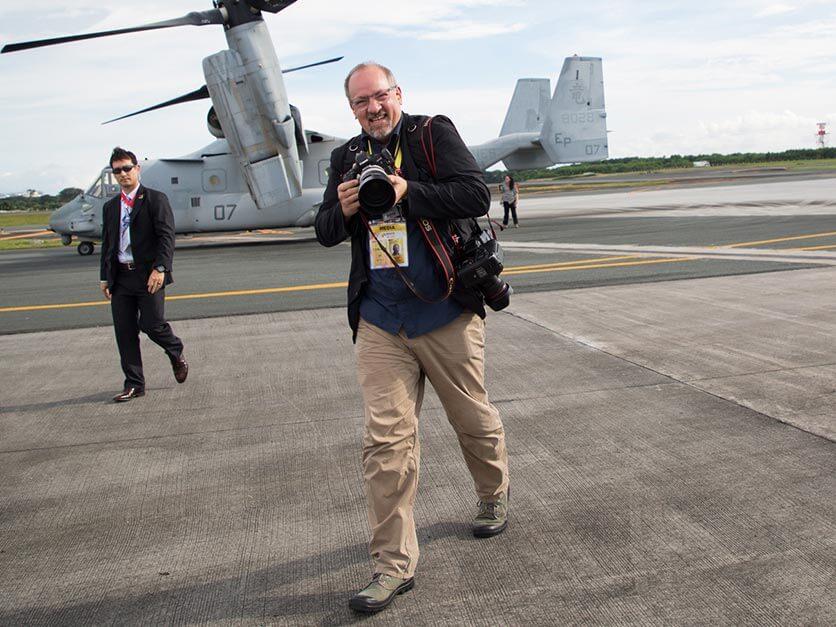 Reuters News Pictures photographer Jonathan Ernst has flown on Air Force One and covered three presidents on five continents in more than 40 states, but he learned the ins-and-outs of news coverage at Lenoir-Rhyne.

Jonathan Ernst '93 is currently a Washington-based staff photographer for Reuters News Pictures. A graduate of Lenoir- Rhyne, Ernst earned his bachelor's degree in English and now shoots for some of the biggest names in the business. His work can be seen in print and digital publications around the globe. His image collection is an archive of his work on news assignments for editorial clients, work for relief and development organizations, and work on personal projects during his freelance career. Recently, he was featured in "Living Lutheran."

How did LR Prepare you for Your Current Role as a Reuters Photojournalist?

Beyond what you might consider "the basics"—taking journalism classes with Art Barnes and being editor of the Lenoir- Rhynean—I think the best career preparation I got at LR was the love of learning. I think that's always been the power of a liberal arts education—not to prepare people for jobs so much as to prepare them to be human beings who happen to have jobs. But so much more than all of that, I was propelled forward many times by the guidance and sheer energy of Dr. Marion Love and her husband Keith Wood—whose lifelong friendship I would never have known anywhere else. I was a very young student—I didn't turn 18 until the end of my freshman year—which made me a bit of a handful, I'm sure. But from our very first meeting, Marion was a well of support and encouragement that continues to this day. She took my talents more seriously than I had yet done, and encouraged me to develop them beyond what I thought was possible. I owe her so much, but I also owe LR a debt for being the kind of college where such relationships were formed.

What is a Favorite Memory of Your Undergraduate Experience at LR?

My memories of LR start long before I enrolled. My wonderful sister Heidi Ernst Jones '88 is five years older than I, and I remember being smitten with LR on her campus tour when she was in high school. I thought the racquetball courts, where I would spend a lot of time years later, were particularly nifty. I could say my favorite memories were acting in plays or playing intramural softball or participating in a student exchange program to Russia or any number of things—but that would be a lie. My favorite thing was always the feeling of anticipation walking to dinner. I always knew I was going to spend the next hour or two at the Cromer Center with tables full of friends, laughing the whole time.

What Advice Would you Offer to a Current Student?

Never, ever go home on the weekends. LR lives and breathes when the students knit themselves into a community. It's an entirely organic process. It's not included in your student fees, it's not anywhere in the core curriculum, there's no course credit. You just have to be present and participate. Also, if this is not already a tradition, I would suggest creatively redecorating all of the many statues and oversized saxophones that have popped up around campus. As often as possible. Except maybe the bear. But definitely Martin Luther—he'd really, really want you to.

In the (Living Lutheran) Article, you Reference Assignments to Air Force One. Can you Share one Story That Resonates With you and Left a Lasting Impact?

I've been very fortunate to fly on Air Force One to cover three presidents (so far) on five continents and in more than 40 states—but the funny thing is that you really don't get to experience those places. Once you land, you're almost always covering speeches and events that take on a very familiar look and feel. One that really struck me, though, was a 2015 trip to the tiny town of Kotzebue, Alaska. (Population: 3,266.) It was the first time a sitting president had ever visited Americans north of the Arctic Circle. The main event was in the high school gymnasium, and after the crowd settled, President Barack Obama began his remarks by personally thanking the people of the town for taking in members of the White House staff who had come ahead to plan the visit. He thanked people for taking the staffers into their homes, for welcoming the Secret Service to backyard barbecues. It's something I'd never heard before—other places we visit all have hotels and restaurants galore—which immediately catches my attention at a political event. And when I turned around and looked out in the crowd, it struck me that almost everyone in the entire town must be sitting there together. Many old faces looking up and seeing something they never would have thought plausible in their town—the President of the United States—and some wiping away tears. I have another wonderful sister, Ruby, who is Native American like so many of the people in the gym that day. It was incredibly moving—a version of America we don't see too often—and I'm continually lucky to witness these moments and share them with people around the world.

What one Photo do you Have That is More Memorable Than all Others?

For me, and I think for a lot of photojournalists, it's often the circumstances around the pictures that are more memorable than the pictures themselves. My first newspaper was the Asheville Citizen-Times, where I was very lucky to start in the kind of on-the-job-training situation that hardly exists on scaled-back newspaper staffs nowadays. I only got to shoot assignments on the weekends, and about four months after I started, I had a Saturday where I started out in Asheville at a Martin Luther King Jr. weekend civil rights breakfast and then headed down the road to Clemson to shoot the Clemson-UNC basketball game—which was a bigger-than-usual assignment for me. It rained so hard on the drive to Clemson that I had to pull off the road a couple of times. I got there late and I nearly face-planted into Rasheed Wallace's navel as Carolina came running out of the locker room while I was rushing to get to the court ahead of them for tipoff. I shot the game and headed back to Asheville, where the heavy rains had continued and where I finished the night shooting a harrowing situation where a pair of firefighters capsized in a hovercraft while looking for flood victims in the dark. The next day, my picture of the firefighters clinging to the side of a small bridge as their hovercraft washed away led the front page. My picture from the MLK breakfast led the Metro section. Most memorably, though, my picture from the basketball game led the Sports section—the moment when the Clemson coach was ejected for blowing his stack because he thought UNC's Dean Smith was taunting the Clemson players from the bench. The Clemson coach then was fellow LR Bear Rick Barnes '77—I've seldom been prouder.

With a passion for traveling, alumna Chrissy Elliott has been to travelled to 55 countries, 47 states and five continents in the last 25 years – and has no plans on slowing down.

Relive the last 100 years of LR football with “Bear Nation: Between the Bricks” – an illustrated coffee-table book by writer and archivist David O. Stephens '69.