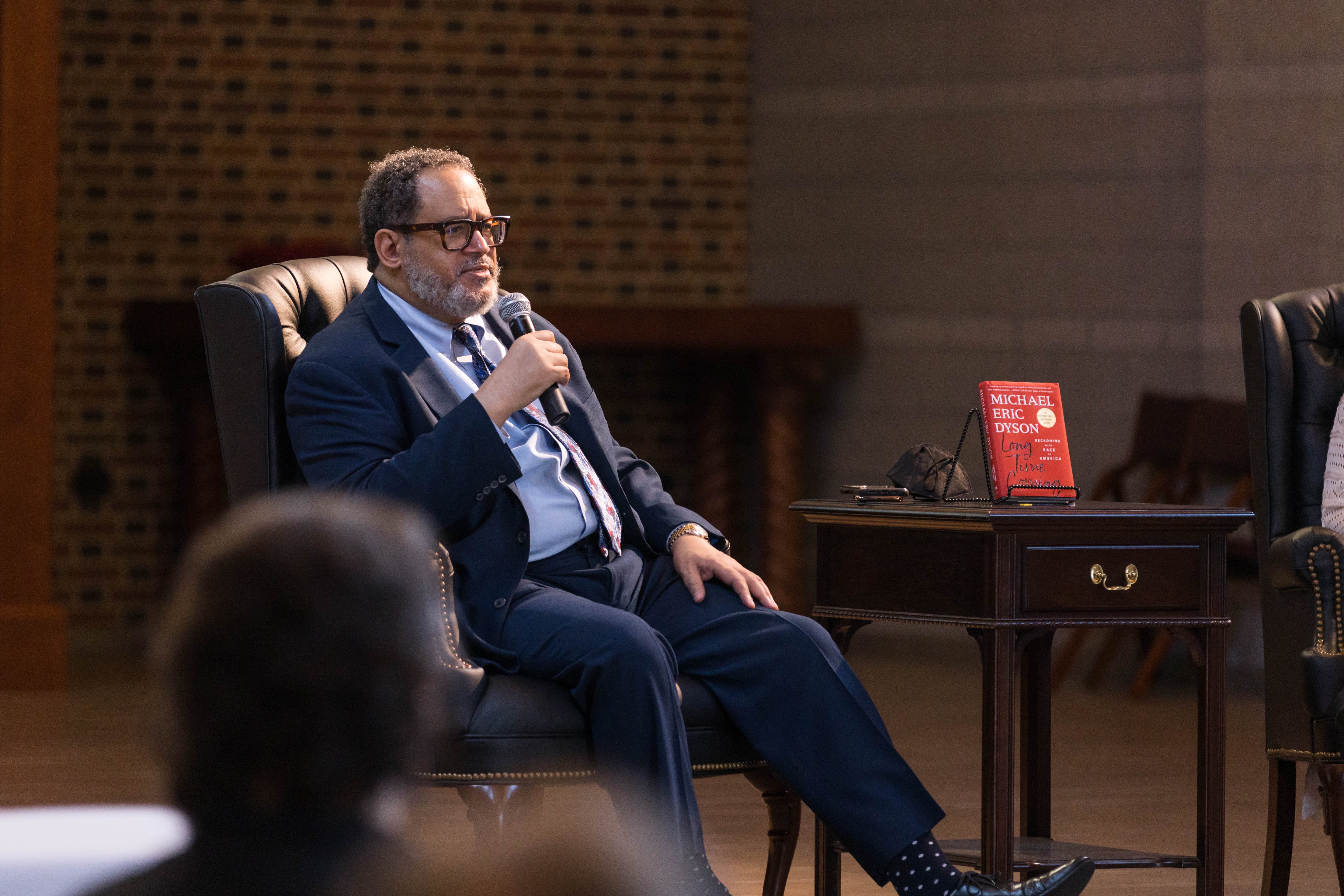 A mix of intellectual discourse, English poetry, stand-up comedy, hip-hop and a little old-time religion — The Rev. Michael Eric Dyson, Ph.D., brought it all to a packed house at P.E. Monroe Auditorium on Sept. 16.

Before he was a world-famous scholar, professor, commentator and writer, Dyson was a Baptist preacher. The author of this year’s campus read, “Long Time Coming: Reckoning with Race in America,” came to Lenoir-Rhyne to spread the gospel of learning, honesty and progress.

“What I’m asking us to do is reject our citizenship in the United States of Amnesia,” he announced, bringing forth the guiding principle of his hour-long talk that opened the 2022-23 season of the Lenoir-Rhyne Visiting Writers Series. 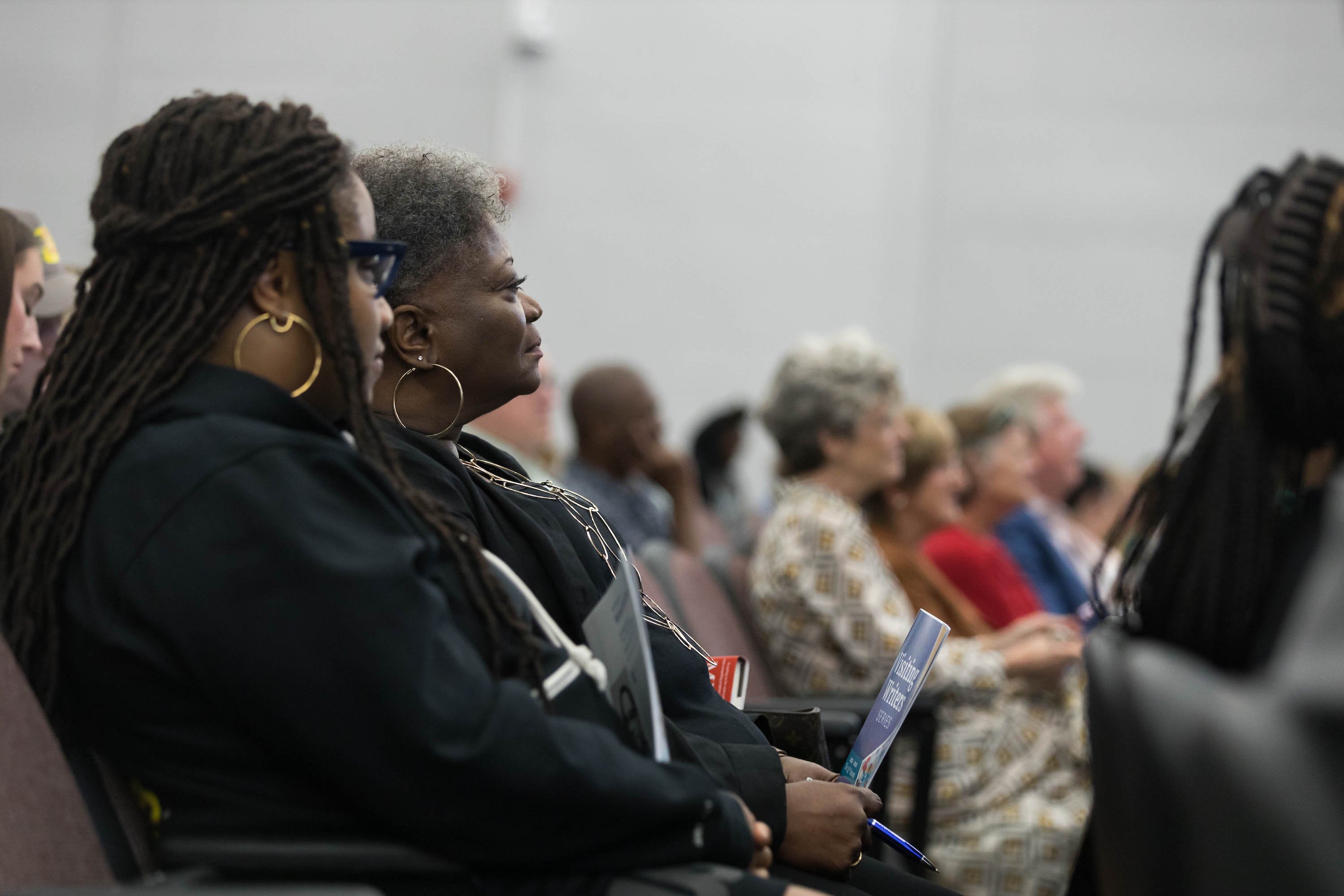 For Dyson, that reckoning depends on an education that confronts the truths of American history, which allows us to confront the deep injustice in our nation’s past, beginning with the reality of slavery. Only by coming to terms with history can we make real progress toward the freedom and equality this country promises, but has yet to deliver to many.

“And yet the facts of history have now been ground up in the machinery of amnesia and deliberate forgetfulness,” Dyson said, pointing to the current trend in politics toward banning books and changing state curricula enabled by governors who fear making white students uncomfortable.

“My friends, you can never be educated if you are comfortable,” he declared. “Discomfort is the predicate and premise of real education.”

The audience — a large and fully diverse crowd of students, faculty, staff and community members — broke into cheers and applause.

The current state of American politics

Practicing what he preached, Dyson spared little time for his audience’s comfort, naming names of leaders of all races, in all levels of government — the U.S. Senate, the Supreme Court and the White House — who would prefer to forget the past and maintain a status quo that disproportionately favors white people, who have taken pride in projecting a lack of knowledge.

“And so, there was a spurning of intelligence and a spurning of study,” Dyson said, pointing out that formal education and real knowledge don’t always go hand in hand and rejecting the label of elitism often cast toward academic titles. “You don’t need a Ph.D. to love learning.”

What we do need, according to Dyson, is a willingness to step out of our own comfort zones and engage with people different from ourselves. “Be willing to reach across aisles. Be willing to have conversations that expose you to arenas of ignorance you didn’t even know you possessed.”

Dyson went on to remind his audience what is at stake by returning to the potential loss of fundamental rights inherent in silencing truths in the name of comfort. “Banning books is anti-American. I thought we believed in dissent.”

At the intersection of cultures, COVID-19 and hip-hop

Continuing to place comfort over progress costs lives, clearly visible in the examples raised in Dyson’s book, as well as public backlash against the Obamas, and the juxtaposition of George Floyd’s death at the hands of Minneapolis police and the tolls of the COVID-19 pandemic.

In his talk, Dyson expressed hope – hope at the number of white people involved in protests after Floyd’s death and at the influence of artists such as Jay-Z and Nicki Minaj on younger generations. “That’s how Obama became president,” he said, “the kids took the authority of a Black figure seriously.” 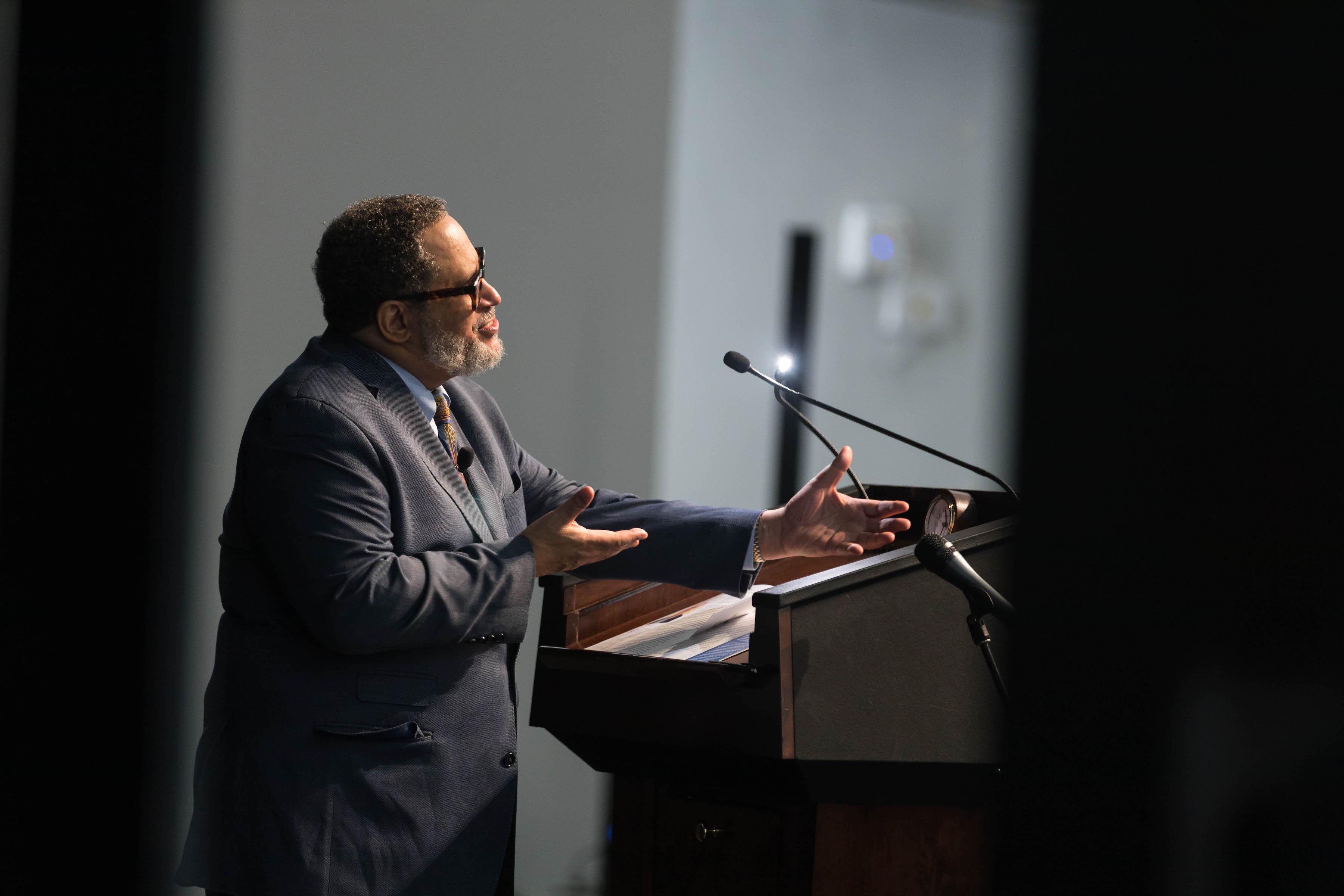 Pop culture’s ability to unite and enlighten became apparent moments later when, as Dyson cited relevant hip-hop lyrics from Tupac and Jay-Z, the crowd joined in when he got to “Juicy” by Notorious B.I.G. getting loud for the line, “Now we sip champagne when we thirsty.”

The sing-along set up an end to the evening that challenged everyone present to overcome prejudice, beyond racial lines to include sexual orientations, gender identities, economic levels and disabilities, to find the common ground. “Everybody has to challenge the perimeters and the universe of their bigotry and prejudice.”

More in common than apart

Dyson brought forth the topics of the writing process and cancel culture during a follow-up question and answer session in Grace Chapel on the morning of Friday, Sept. 16, before his return to Nashville, where he is a professor in the divinity school at Vanderbilt University.

Addressing another full room of students, faculty and staff, he grew quiet as he reflected on the emotional toll of writing “Long Time Coming” – having chosen many of his chapters based on figures and tragedies most prominent in the public consciousness.

“For me, it was very difficult to wade through all that anger all over again, and then I wanted to find attempted routes to express that anger so it can be transformative instead of perpetuating trauma.”

With that reflection came a reflection of hope, once again, that the protests of white people in the wake of George Floyd’s death signaled a change in popular thinking that is worth encouraging.

“When you think about what you can do, right now, I provide a safe space so people can hash it out, argue about being confronted with their limitations and also figure out the way to go,” he said,  elaborating on why cancel culture is so damaging. It leaves no room for mistakes, learning or growth. That growth, according to his last words on Thursday, is really the point of all this.

“We are all struggling for a common property, of clear vision, of legible hope and a deep desire to maximize our potential as human beings on earth. And so we want to reject our citizenship in the United States of Amnesia by recognizing that ultimately, we’ve got more in common than we’ve got apart.”