The wide world of faith

In August and September 2022, a group of students and faculty from Lutheran Theological Southern Seminary (LTSS) joined the World Council of Churches (WCC) Assembly in Karlsruhe, Germany for ten days of spiritual, cultural and personal enlightenment. 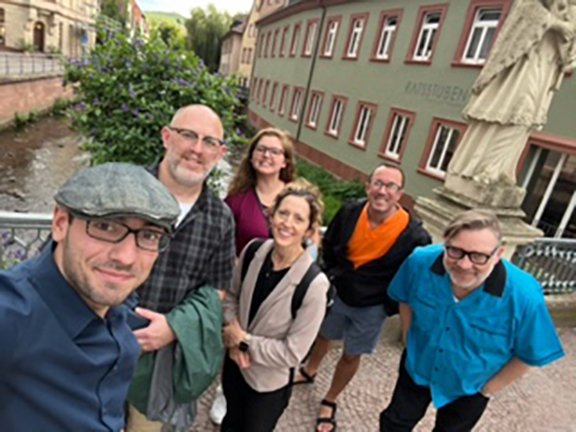 “It’s really a once-in-a-lifetime opportunity for our students because the assembly doesn’t happen every year,” said the Rev. Melanie Dobson, Th.D., an assistant professor at LTSS who organized the trip.

The WCC formed in 1948, when the aftermath of World War II prompted Christian churches around the world to re-examine their priorities and approaches.

“The desire — particularly for Protestant churches at that time — was to discern how they could follow God’s mission in a world where European colonialist power, with which the church was deeply intertwined, had done so much harm,” Dobson shared.

“The World Council of Churches was founded as a way of discovering how different churches could be in conversation, to do meaningful work together and focus on issues that really matter in the life of the church and for the good of the world — this work is what ecumenism means.”

The WCC Assembly gathers every eight years, meeting in a different location — in 2013 it was Busan, South Korea — to engage in important conversations and strategize solutions to global problems. In 2022, the most critical topics included racism, indigenous people’s rights and climate change.

Preparing for the journey
Among Dobson’s international experiences in her student days, she spent a year at the University of Bonn while working on her Master of Divinity. When LTSS rector and dean the Rev. Dr. Mary Hinkle Shore, extended a call for faculty members interested in leading the WCC Assembly trip, Dobson volunteered.

“I knew I would love to go back to Germany and to bring our students exposure to the WCC, to ecumenism, to worshiping and understanding God from a multicultural, multitribal experience of Christianity,” Dobson said.

That vision — and the tireless assistance of the William and Robert Shuford Center for International Education at Lenoir-Rhyne and its director, Brittany Marinelli — motivated Dobson through the logistics of organizing the trip and the students’ academic credit for participation.

An LTSS fund for ecumenical study made the trip possible and kept participants’ expenses minimal. However, because students were attending the assembly as participants rather than elected delegates from church bodies, Dobson also worked with WCC officials to craft a program specifically suited to the group.

“It was a heartfelt effort to get this trip together,” Dobson shared. “It took a lot of calls and emails, but when we got to the assembly, I was really heartened to see how many ecumenical officers and church leaders were eager to meet our students, to share and connect with them.”

Making global connections
For Master of Divinity student Mac Mullins ’23, his experience abroad was all about perspective.

“Germany was everything I expected, and it was nothing like I expected,” he shared. “For example, taking the train from Munich, you’re in this super-modern high-tech train, and in the window, you’re seeing this 1000-year-old building just sitting in the middle of a little town. It’s incredible.”

As a Lutheran minister in training, Mullins found new perspectives and new goals within his church as well.

“In the United States, Lutherans tend to think of themselves as German or Scandinavian, but what I learned was the majority of Lutherans in the world are not white Europeans — they’re in the global south, Africa, Asia and the Pacific islands,” Mullins shared.

The diversity of global voices represented in the assembly’s daily worship left a lasting impression on Lynette McSpadden ’25, a student pursuing a Master of Arts in Christian Ministry and ordination as a Lutheran deacon.

“In the morning and evening we had worship with prayers and music, and different countries would share their language and music. At one service we had Aramaic chants. Another day we had three thousand voices saying the Lord’s Prayer, all in different languages and voices. It was really powerful.”