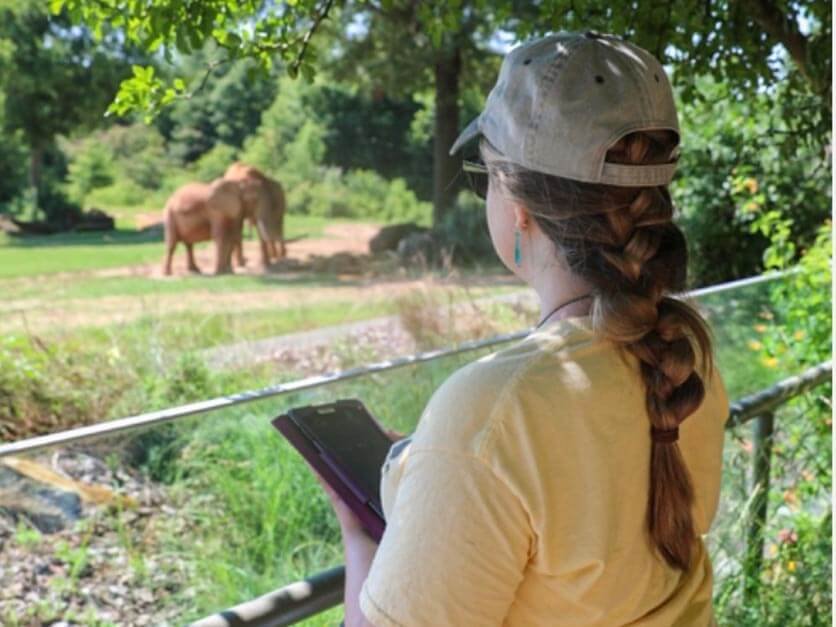 Emma Throneburg is interning for the summer

Throneburg is tasked with collecting observational data on Louie the elephant to develop the North Carolina Zoo's understanding of his daily behaviors.

Emma Throneburg was born and raised in Hickory, and now she's studying one of the great, iconic animals of the African Serengeti.

A senior biology student at Lenoir-Rhyne University, Throneburg is spending the summer interning for the North Carolina Zoo at Asheboro, where she is studying their elephants, specifically Louie, an 18-year old male new to the NC Zoo, and how he integrates into the herd.

"When I found out about the project, I was ecstatic," Throneburg said. "I've always loved them, and once I found out I could study them, I didn't want to do anything else."

Biology professor Carly York, Ph.D. initiated a relationship with the NC Zoo where Lenoir-Rhyne sends a student to research an animal or group and report their findings. In 2019, Lonnie Fox, a 2020 LR alumnus, studied chimpanzee behavior and provided that data to the NC Zoo. It was such a productive relationship that both parties decided it should continue.

Born at the Toledo Zoo in Ohio, Louie was transferred to the Omaha Zoo in Nebraska in 2017 as part of their breeding program. His addition to the North Carolina Zoo is part of a recommendation from the African Elephant Species Survival Plan through the Association of Zoos and Aquariums to increase diversity within the species.

Throneburg is tasked with collecting observational data on Louie to develop the North Carolina Zoo's understanding of his daily behaviors. She is also tasked with recording interactions between Louie and the NC Zoo's four females — Rafiki, Nekhanda, Tonga and Batir — as they integrate into a herd.

"Zookeepers helped me identify certain behaviors," she said. "They looked at my ethogram and edited it a little bit. Then, they added some behaviors that are specific to these elephants."

An ethogram is a highly adaptable table that can be utilized when researching and cataloguing behaviors in various animals. York uses ethograms in her research, and she's helped LR's students adapt them for their work.

"My hope all along was to develop a good relationship with the NC Zoo where we can send an honors student every two years to work on a project," York said. "Our ultimate end goal is to make sure the NC Zoo gets information that is useful for them, and it's a fantastic experience for the student."

Throneburg works at the NC Zoo several times a week when she focuses on observing the elephants, while they're in their viewing habitat. She watches each one in 15-minute increments noting in an ethogram a behavior for each minute they are observed. Are they moving? Are they sleeping? Are they eating? What are they eating? Do they seem content? At the end of each month, she calculates and prepares the data in a report for the NC Zoo. By the end of the summer, there will be several months of research and a strong baseline on how the elephants normally react. Then, the NC Zoo can monitor them more easily and address any situations that may arise.

In addition to providing that information to the NC Zoo, Throneburg will also present her research for her honors biology research project and at the North Carolina Academy of Science next spring.

In order to help Throneburg achieve all this, she applied and was accepted for the 2021 Appalachian College Association Ledford Scholarship, which provided funding for her trips to and from the NC Zoo, as well as an hourly wage.

"I was concerned about money for the summer," she said. "I support myself, so I knew money was an issue, but this scholarship allows me to do all of this."

All doctor of nursing practice students complete field study. Few of them go as far afield as Nigeria, where Ugonna Ukwu '23 chose to bring research into practice at a local hospital.

Nanette Nikolajsen '24 has pursued adventure before – in the Danish military, backpacking through Asia – and now here at LR on a nationally ranked triathlon team.