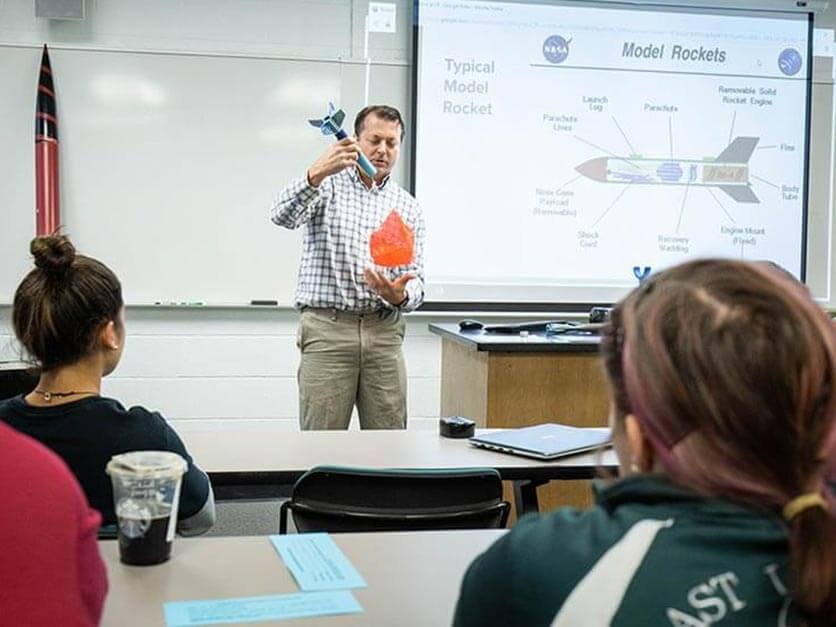 NASA featured teams from 52 other states

The team, which is a component of LR's Balloon Engineering and Rocketry Club, was among 52 other universities from 22 states selected through a competitive proposal process. As part of the competition, they have been working the past seven months to build and successfully launch a 92-inch rocket.

According to Doug Knight, Ph.D., visiting professor of physics and BEAR Club mentor, the team scored above average on a Preliminary Design Review (PDR), which was submitted to NASA in November 2018. They have also designed and built a 2/3 scale rocket and have completed several test flights of their full-scale rocket, successfully demonstrating rocket stability and payload safety.

The NASA Student Launch Initiative is a competitive engineering design challenge project that provides cost-effective research and development to support the Space Launch System. One element of the Student Launch Initiative requires each team to complete community outreach projects centered around rocketry. LR's BEAR team visited East Alexander Middle School and Gamewell Elementary during the fall semester, where they taught students how to build a rocket out of a water bottle.

"I always enjoy seeing the enthusiasm and results from the students who accomplish building a water bottle rocket," said Juan Hernandez, member of the Rocketry Team. "We all love to get involved with our surrounding communities as much as possible."

Current funding for the initiative has been received in the amount of $5,000 from a North Carolina Space Grant and an additional $5,000 donation was given by an LR graduate. First and second-place winners will receive a cash award and the top 10 teams will be recognized by NASA. Students are graded on numerous reports, such as the PDR and motor changes to the rocket, and are penalized for late submissions.

LR's Rocket Team will livestream the launch on their Facebook page, Facebook.com/LRBalloonTeam.

To learn more about the Rocket Team and BEAR Club visit LRURocketry.org.