University marks a major milestone for the facility, which has been a treasured part of the LR community since 1924. 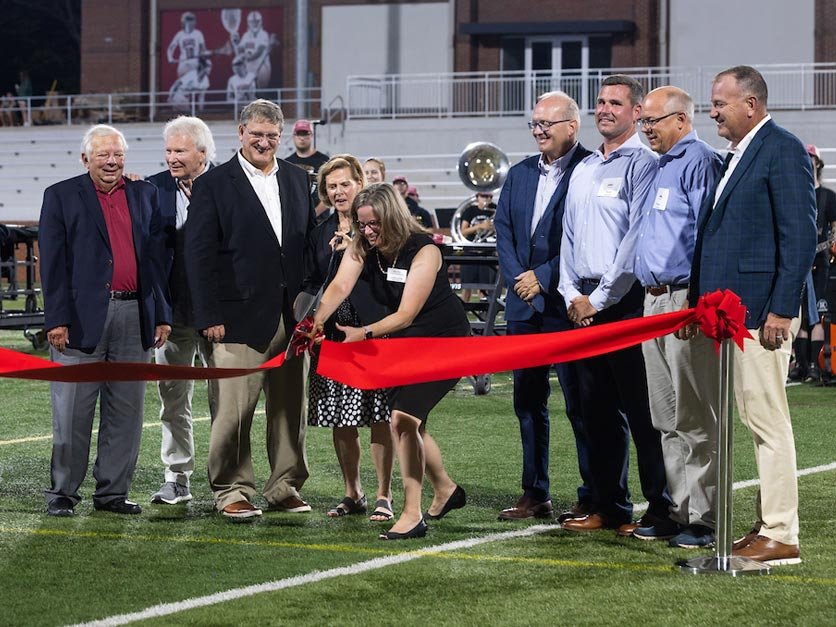 Lenoir-Rhyne University celebrated the completion of its $18 million Moretz Stadium renovation on August 18 with a ceremonial ribbon cutting, champagne toast and fireworks. The event, which followed more than a year of work on the project, marked a major milestone for the transformation facility, which has been a treasured part of the LR community since 1924.

“I often like to say that Moretz Stadium is like our Wrigley Field or Fenway Park—it is absolutely iconic for Lenoir-Rhyne and this is a night befitting of it,” said Dr. Fred Whitt, university president. “These renovations put us among the top in NCCA Division II—and I’d say better than some Division I schools—and will help us in attracting not only the best student-athletes, but also it will serve as a resource for the Greater Hickory community.”

In addition to serving as home to Lenoir-Rhyne football and men’s and women’s lacrosse, the renovated stadium will host all kinds of events, including youth sports camps, concerts, movie nights and graduations.

“This has been a once in a lifetime experience and amazing process for our entire LR community to be a part of,” said Kim Pate, vice president for athletics. “This project raises the bar and helps us realize what we can accomplish when we commit to doing something bigger than we could have imagined. The renovations to Moretz Stadium will have a transformational impact on our entire campus, athletic programs and the greater Hickory area for generations to come.” 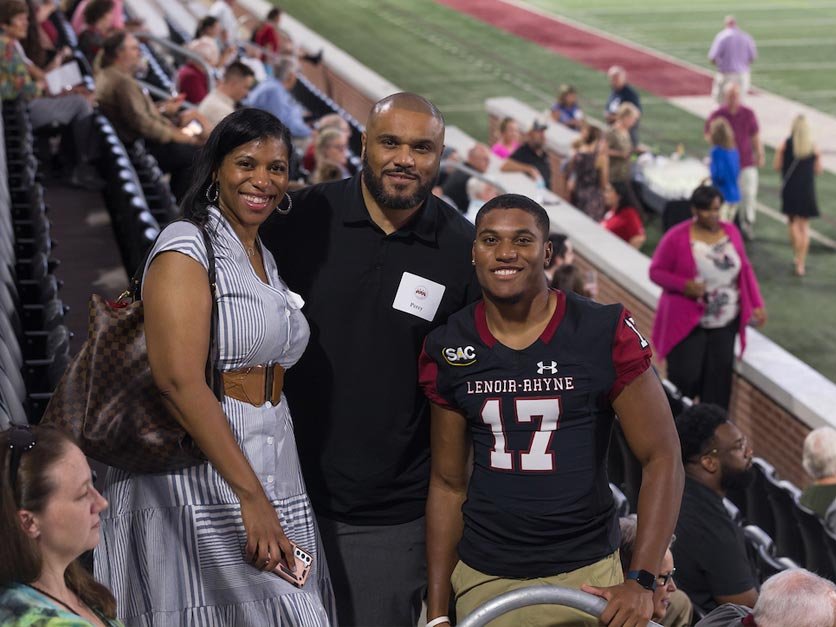 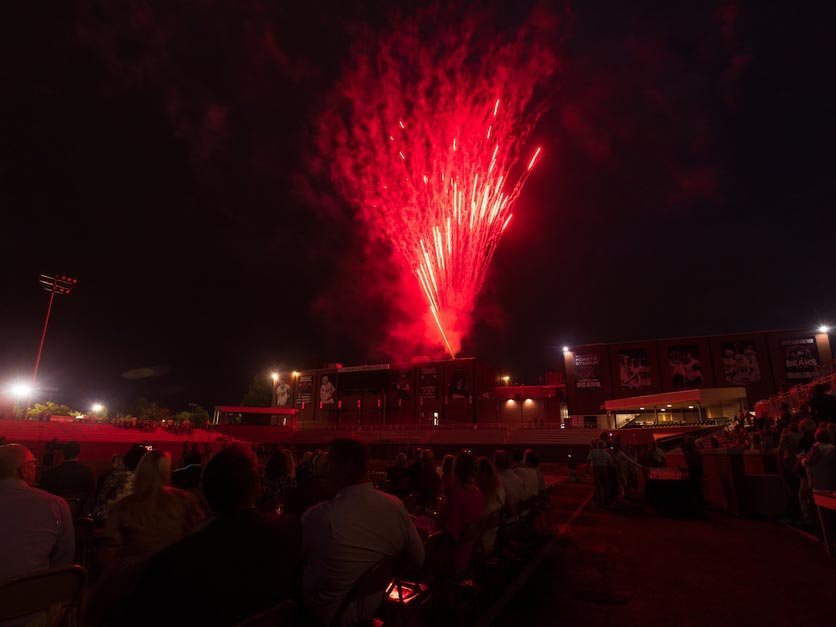 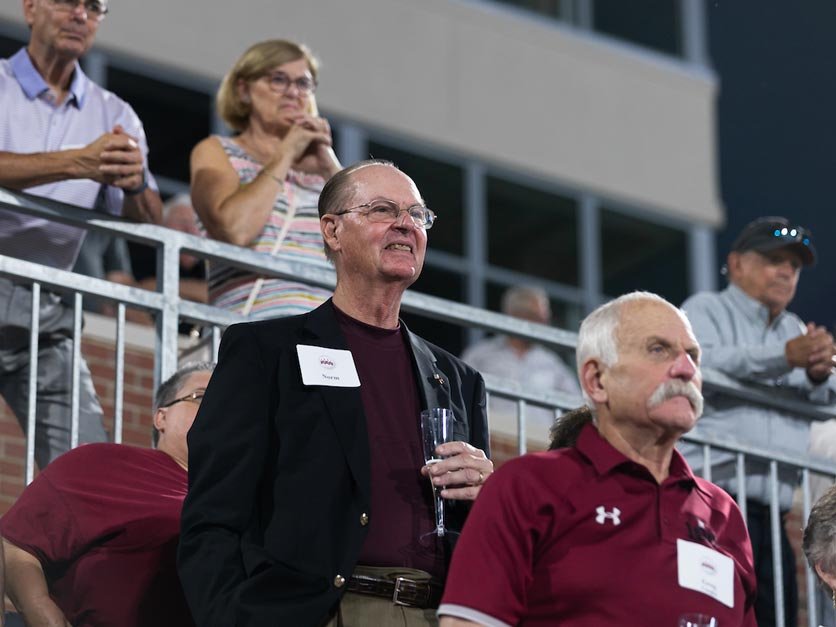 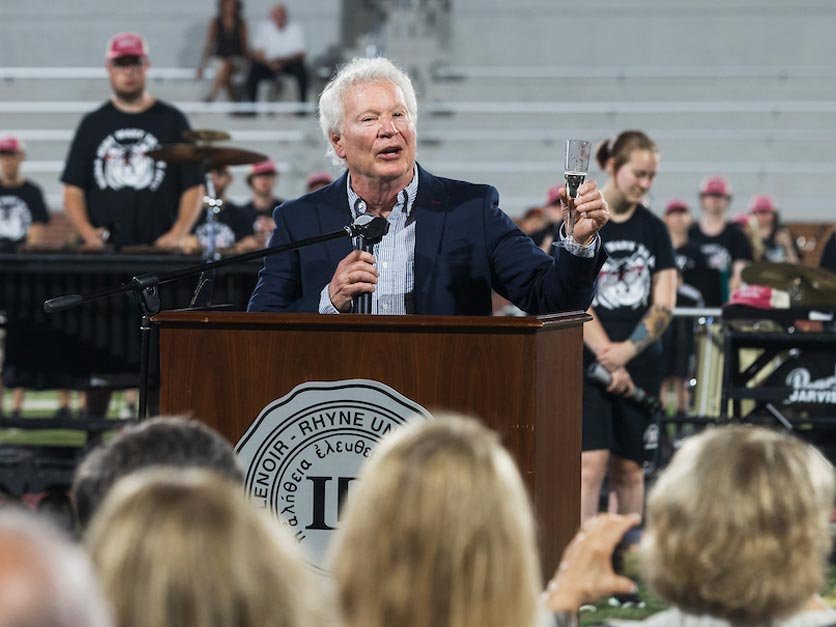 LR athletics benefactors and supporters turn out to celebrate the completed renovation of Moretz Stadium and unveiling of Moretz Sports Athletic Campus.

The celebration of the completed stadium coincided with LR’s Bears Club Annual Dinner festivities, which brings together the university’s official fundraising supporters of Lenoir-Rhyne athletics.

The project was made possible through the generous support of Lenoir-Rhyne benefactors, including George and Carolyn Moretz for making the first gift of the Centennial Campaign for Moretz Stadium. Marilyn and Johnny Moretz provided significant support and the entire Moretz family, including Taffy Moretz DeCuzzi, continued their support of the stadium and LR. Marilyn and John Moretz also made a significant lead gift to the project and as a result of their longstanding generosity, the university will name the entire athletic campus the Moretz Sports Athletic Campus in their honor. The Moretz Stadium Steering Committee was co-chaired by John Moretz and Rhett Durham.

Dr. Fred Whitt thanked the community for their unwavering support of the project, including members of LR’s board of trustees and board chair Madeline Dassow.

“Thank you to all of you who have made a gift to and supported this project. Your dedication to LR is truly remarkable,” said Dr. Whitt.

For more information about the Centennial Campaign for Moretz Stadium, please visit www.lr.edu/moretz-stadium.