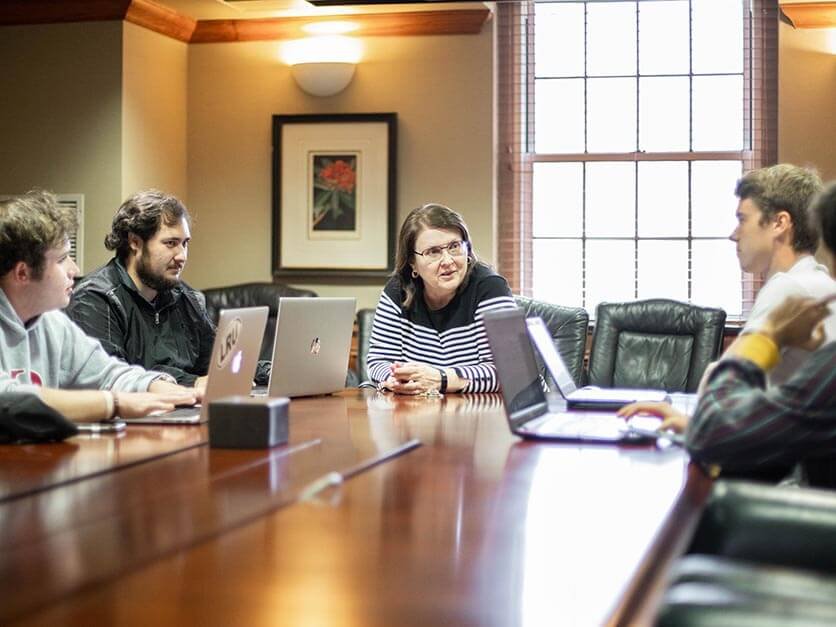 The university gave the investment club a $50,000 endowment to manage, which the club had tripled at one point.

To make sure it is operating soundly for generations of students both current and future, Lenoir-Rhyne University leans on the advice of experts to make sound financial decisions.

And that's proven to work, even if some of the "experts" are still cutting their teeth in the financial world.

Six years ago, Dr. Mary Lesser went to the LR Board of Trustees with a proposal to start a Portfolio Management Club on campus made up of students majoring in finance, economics and related majors to manage actual money buying and trading stocks.

"Our discussions each week typically take the form of buy, hold, sell," Lesser said. "What do we have? Is there anything we want to get rid of? We dumped (General Electric) before everything fell apart, which was good. We bought Amazon, and most recently we bought Gilead. We bought at 65, and it was up to 74 or 76, so that's done rather nicely."

Around a dozen students participate with some taking part for course credit toward either Business 443: Portfolio Management or Business 341: Investments. However, students don't have to participate as part of a class. Some students continue with the club after the class ends. Others join before taking one of those classes and stay for the duration of their academic careers.

"Anyone can join," Lesser said. "Starting out, they can watch and learn and be educated by their peers as they grow into a role. Now and then, I'll assign a project, but we have some really good discussions."

Some of those discussions are on whether to buy or sell an individual stock. Others are on how exposed the portfolio is in a particular sector. More recent discussions have looked at the current state of affairs worldwide with the Coronavirus (COVID-19) and how it affects the economy.

"There are companies already moving toward vaccinations," Lesser said. "So you look at the possibility of once the virus goes away, what do you do? There are giants like Disney that are down. Do you buy? Once everything calms down and everyone is traveling again, will it go back up? What about cruise ships or airlines?

"When we brought up Gilead in the team discussion, it was because it was the first mover in a vaccine for Coronavirus. It's a mover in medication, biotech and pharmaceuticals."

When the club started back in 2014, they were given an endowment of $50,000 to manage with a stipulation that they focused on long-term investments in U.S. equities only. Through a combination of trades and additional funds contributed by the board, that number has more than tripled.

"Anything we make goes back into the portfolio, and we reinvest it," said senior finance and marketing major Justin Russell.

Under her leadership, Lesser not only guides the students but she also encourages them to make decisions without her influence.

"I reserve the right for the ultimate veto, but I also respect the fact that I am older than they are," Lesser said. "My view of the world, the products that I buy, the things that I do are different than them. They may very well be seeing opportunities that I just wouldn't be seeing."

The club bought Amazon stock at 700, which had tripled at one point.

"We've had our ups and downs, but there've definitely been more ups," said junior finance major Connor Stanley. "We've beaten a lot of portfolios from other schools."

Almost every member of the team has extracurricular experience outside the club that adds an extra dimension.

"A lot of our students are also athletes, so they have that competitive edge," Lesser said. "It's a wonderful thing."

There are older students with associate degrees and international students with a global perspective. Five members are involved in athletics with representatives from lacrosse, golf and tennis.

"LR has a management company that looks at all their service providers, and we're just one of those providers," Lesser said. "We were evaluated against a couple of comparable vanguard funds, and we beat them. That's kind of like LR's football team going out and beating the New York Giants."

After graduating with her bachelor’s degree in public health, Hannah Fowler initially thought she was done with school. But, after working in a doctor’s office, she realized her love for the clinical side of health care.

Lenoir-Rhyne University will require the COVID-19 booster vaccine for all eligible faculty, staff and students on its Hickory, Asheville and Columbia campuses. Eligible individuals are those who are at least six months beyond the date of their second shot of the Pfizer or the Moderna vaccine or two months past their Johnson & Johnson vaccine.