Birmingham, West Midlands, is a bustling city of more than 1 million people. As the second-largest city in England, it’s a manufacturing hub, a cultural center home to orchestra, ballet and theatre and home to the University of Birmingham. Taylor Newton, Ph.D., and her family had plans of making it their new home, as well.

Newton had spent 10 years in front of a classroom, including the last five as a psychology professor at Lenoir-Rhyne before taking the opportunity to have a professional leave year in 2020-21 and complete research in her area of specialty.

“I had secured a visiting researcher position at the university there,” she said. “We had a house lined up south of Birmingham, and we had rented out our home in Hickory. Our kids were transferring to schools to the United Kingdom.”

COVID-19 had other plans.

“That was in January and February of 2020,” Newton said. “After lockdown, we held out hope because we weren’t supposed to move until summer, but I remember vividly when we finally realized we weren’t going. We canceled our plans and adopted a cat.” 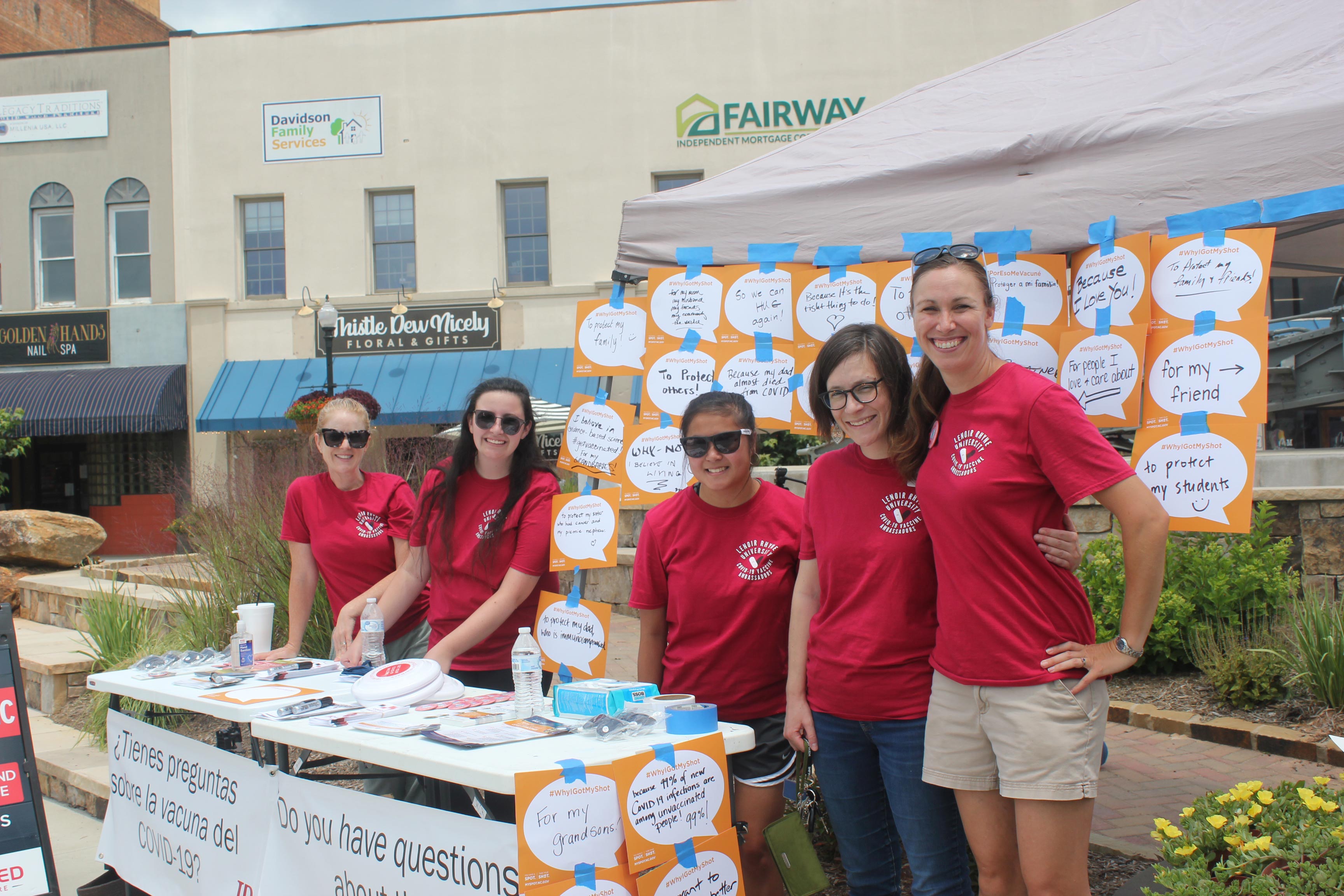 Purpose and Passion in New Path

With her year of professional leave approved and plenty of time to fill, Newton went to work finding something meaningful to accomplish. Her research interests look into the interrelationship of psychology and religion. She had originally intended to study a persuasive technique called paradoxical thinking as a tool to better understand relationships between religiousness, biases and attitudes toward science.

However, the onset of an unknown pandemic that is still surrounded by abundant amounts of misinformation, and her expertise as a social psychologist, put her in the position to be at the forefront of study and research on the ground level in Catawba County and the highest levels in the state.

“It’s common for professional leave proposals to evolve,” said Gary Johnson, Ph.D., university provost. “Sometimes you get into what you think you want to do, and it doesn’t work out. Sometimes it leads you down a different path. I will say the changes and challenges Taylor faced were not common. She had to be very creative in terms of how to adapt.”

In the early summer of 2020, Newton worked with director of LR’s Center for Teaching and Learning Devon Fisher, Ph.D., on developing a virtual COVID-19 class that was free to students, faculty, staff and the community at large and featured instruction from faculty at LR’s campuses in Hickory and Asheville, North Carolina, and Columbia, South Carolina.

The class looked at the virus and pandemic from various disciplinary lenses, including biology, communication, economics, history, physical and mental health, theology and more.

More than 900 people registered for the course, which not only addressed concerns and supplied information for people affiliated with Lenoir-Rhyne and surrounding communities, but it also served as a springboard for Newton to take part in statewide research pertaining to the pandemic.

“We worked with a lot of community partners in the class and people who were dealing with the pandemic in different ways,” she said. “That got me thinking about the sorts of problems our community was facing and put me in touch with public health officials and other community leaders.” 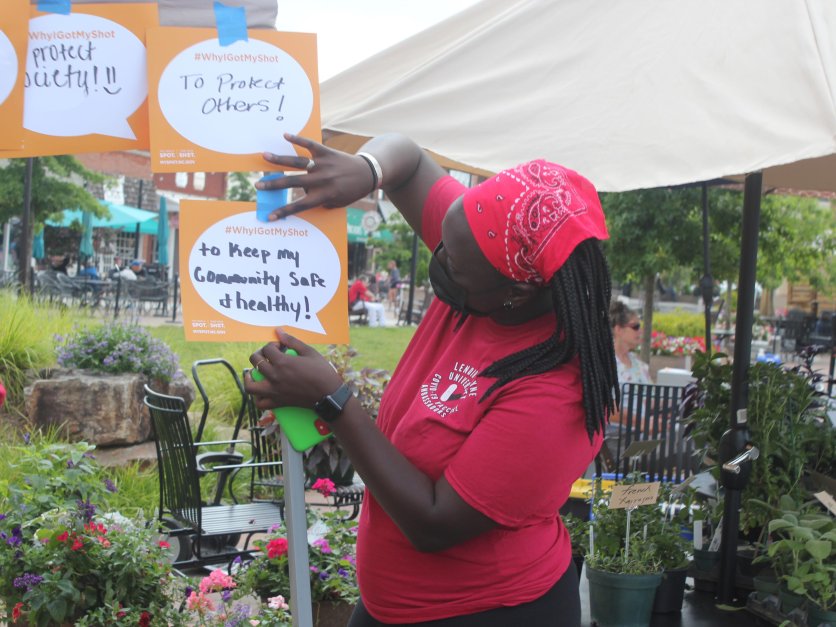 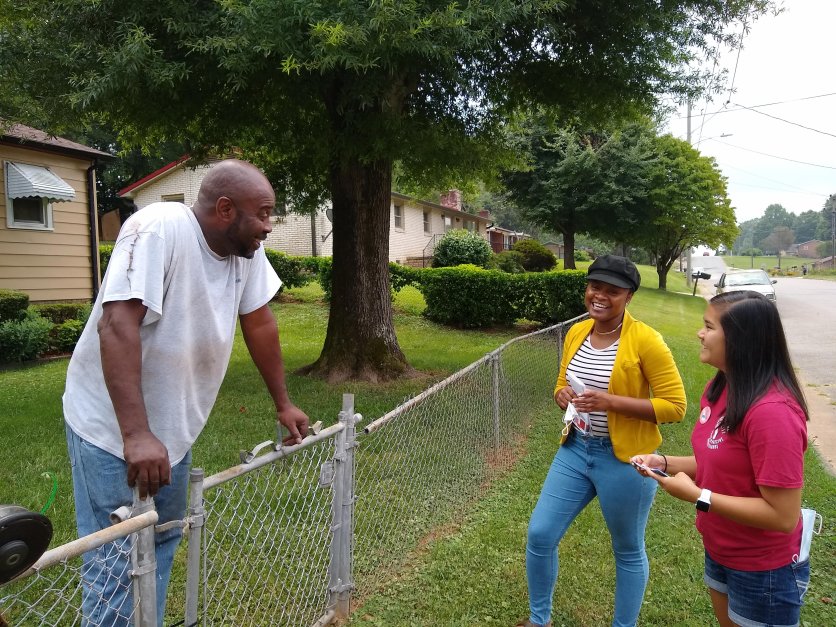 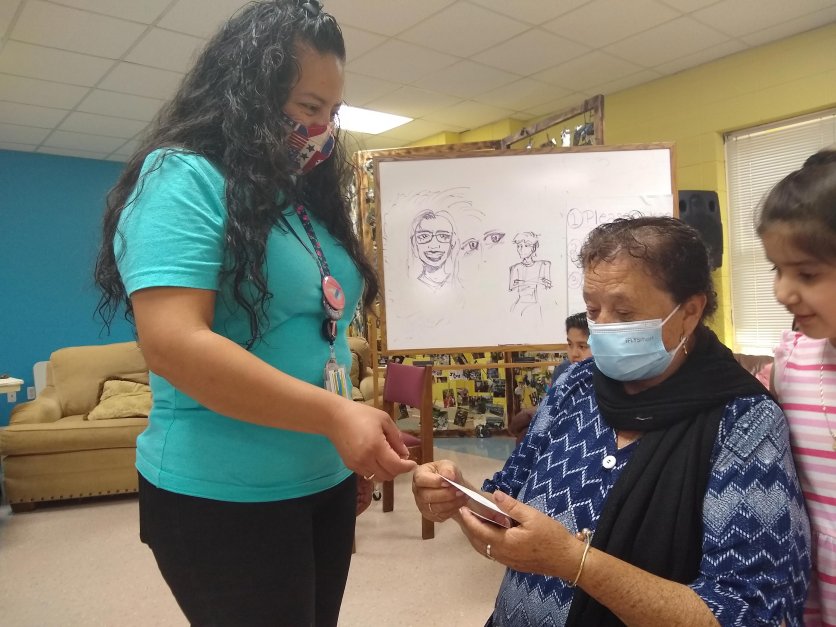 Newton served as a mentor to student ambassadors who worked with their local communities to address issues of vaccine hesitancy as part of a program with the Interfaith Youth Core.

Catawba County Public Health collaborated with an interdisciplinary team at Duke University and North Carolina State University on ways to use behavioral science to bolster responses to the pandemic for local governments around the state.

Newton — aided by the connections she made in the public health department — joined the team and led three research studies within the overall project. In one study, she led a team of LR students canvassing voting locations during the presidential election to collect a representative sample identifying which groups were more likely to embrace vaccines and which were more cautious.

“Early on, even before the vaccines were approved for emergency use by the FDA, we were able to tell which groups were more prone to vaccine hesitancy, and we were able to share that with public health teams to direct their messaging,” Newton said.

She also led a team that looked into adopting the SlowCOVIDNC contact tracing app developed by state officials in Raleigh and led a team that tested an intervention that successfully combated misinformation and encouraged vaccination throughout the Piedmont of North Carolina.

“It was a good experience at a hyper-local level in Catawba County and at the state level doing meaningful and practical work, which isn’t always the case on sabbaticals,” she said. “Usually, you’ll do some research and write an article for a journal. If you look back later, it may have been cited a handful of times. With this, we were able to make an immediate difference.”

And also gain a little perspective.

Newton said even she miscalculated some of the challenges people have faced regarding vaccine hesitancy or the pandemic at large.

“At the beginning, we put a lot of emphasis on persuasion and overcoming misinformation,” she said. “But we underestimated the importance of things like people getting time away from work, securing childcare and having access to convenient locations. There is more than just trust that gets in the way and contributes to low vaccination rates. In some cases, structural barriers are more important.”

As her study with Duke, North Carolina State and public health departments came to a close, Newton steered her research down a different path in a similar direction. She teamed up with interim campus pastor, the Rev. Christy Lohr Sapp, Ph.D., to work with the Interfaith Youth Core and serve as mentors for their vaccine ambassador program.

I wanted to focus on how to continue implementing change in this crisis.

The pair mentored LR students who volunteered for the program. They went through training — virtually out of Chicago — to learn about the vaccines, including how they were developed and work in individuals, how to work with community partners and, most importantly, how to improve access to the vaccine for underserved populations.

“Rather than focusing on getting published right away, I wanted to focus on how to continue implementing change in this crisis,” she said. “I’ve been working a morning each week at the Hickory Soup Kitchen. They were a partner who wanted vaccine hesitancy outreach. Around that time, Christy told me about this opportunity with Interfaith Youth Core and ways to do more outreach, so it made sense to meet the needs of one by partnering with another.”

The duo served as mentors for 14 students — who hailed from as close as local communities to as far away as Virginia, Tennessee and Georgia — on outreach initiatives. They set up tables and spoke to people on college campuses and street festivals, hosted vaccine clinics for underserved populations and worked with a local artist to create stickers and temporary tattoos for pediatricians who distributed them to children who were eligible to receive the vaccine. In addition, some ambassadors worked with churches and health departments on door-to-door campaigns before the program concluded at the end of summer.

With her professional leave completed, Newton submitted a report of her research and findings to the professional review committee and Johnson, as well as the Appalachian College Association, both of which funded her research for the year.

“I’ve been very impressed by what she did,” Johnson said. “Her expertise in psychology was hugely beneficial. A lot of what we’re talking about is how to convince people to take the steps necessary to be healthy and safe. She has helped inform communities and students. She has unified people and helped develop that message.”

It was a significantly different end to the year than Newton could have imagined back in January 2020, but it is one that will have continued influence and affect change.

“It was definitely more impactful,” Newton said. “I was going to contribute to the research on paradoxical thinking, but I’ve come to realize that’s a pretty cynical way of persuading people. I was not tempted to use that in my conversations with people about the vaccine. All I wanted to do was listen with empathy. No manipulation and no trickery. Just be there in that moment with someone, even if we disagreed.”

A grant has been awarded to the university to develop resources that recognize the impact of trauma on an individual’s readiness for vocational discernment.