Jamal Stroud MA'18 watched as a stranger rolled up, packed up all his belongings in a garbage bag and took him to the car. It was happening. He was going to a new house with new people. Again. 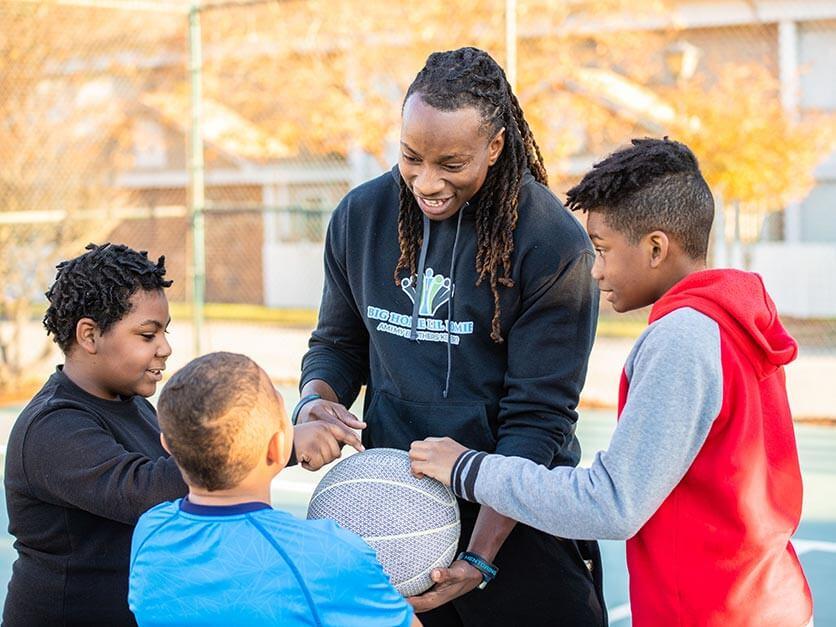 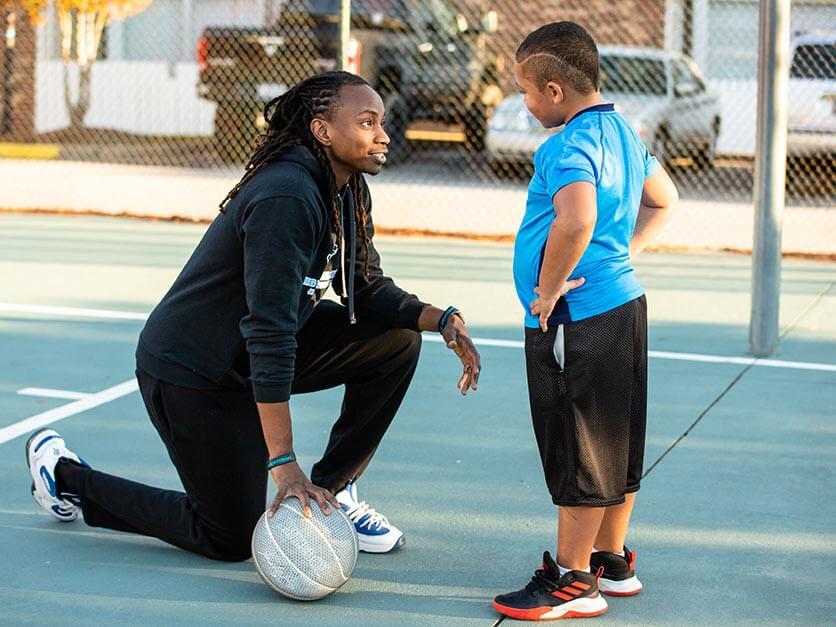 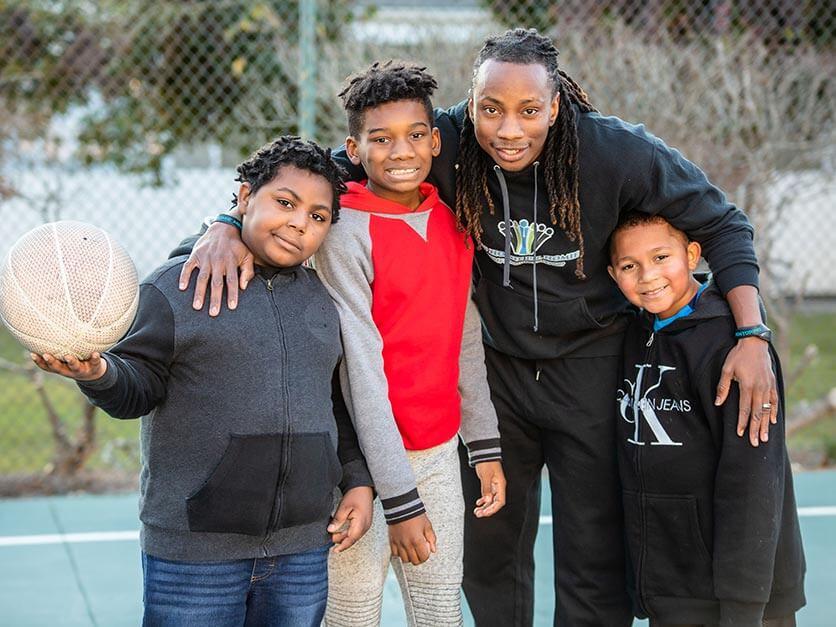 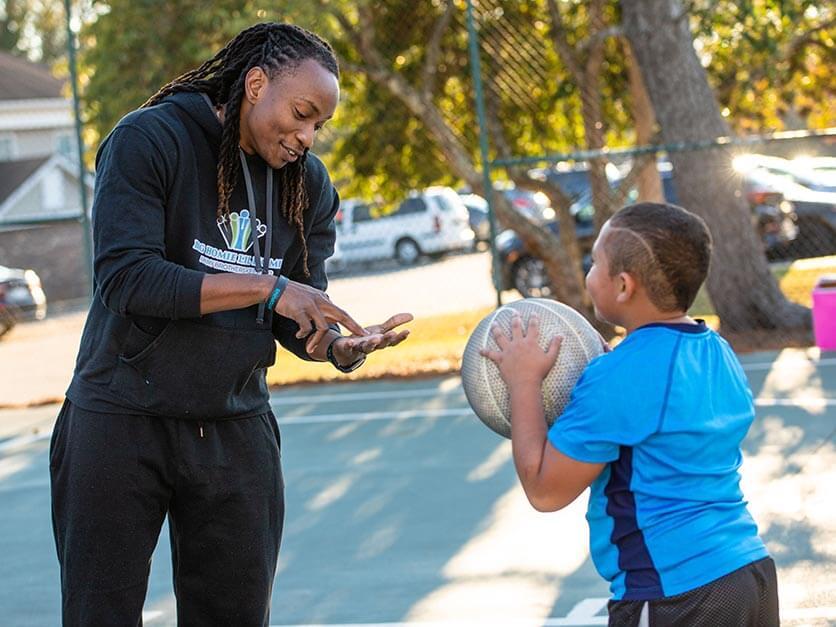 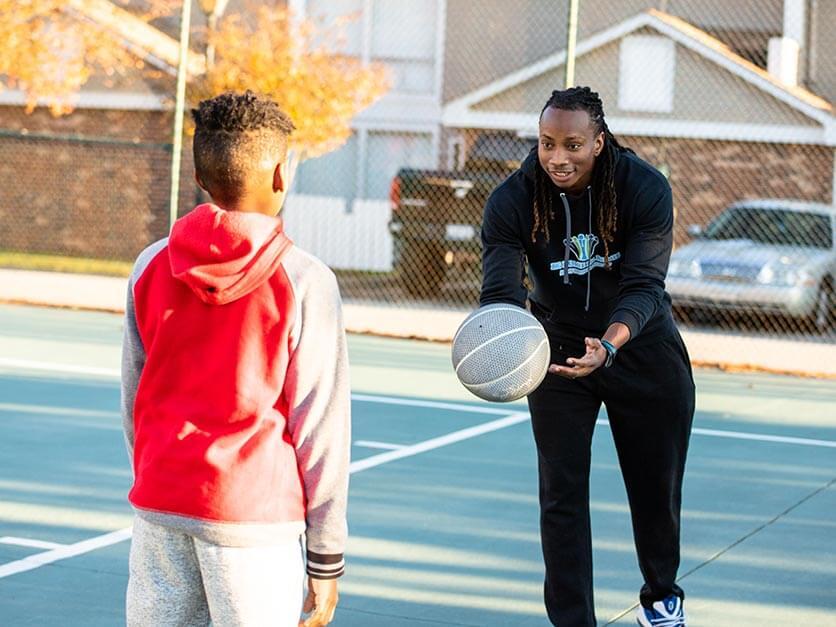 Jamal Stroud grew up in foster care, so he started Big Homie, Lil Homie in order to mentor children in need.

A native of Brooklyn, New York, Stroud grew up in foster care. While in the state's charge, he was continually moved from home to home trying to find somewhere to stay. By the time he was 6 years old, he'd lived in six different homes.

It was a traumatic experience that Stroud knew he had to fix for future generations, which led him to start Big Homie Lil Homie, a nonprofit mentoring program for at-risk youth.

My favorite part is seeing the growth from beginning to end. When you see the children gain that confidence and start to believe in themselves, you can see that change in the way they walk and talk.

"I told myself when I get of age, I want to give back," he said. "Because I know what it feels like to not have a positive, male role model. I started the program in 2017 and it started with two children. Now we serve more than 250 kids in the Columbia, South Carolina, area."

Stroud received his undergraduate degree from Allen University in Columbia, South Carolina. In 2018 he earned a Master of Arts in counseling from LR.

By day, he serves as a project manager for Community Options, Inc. where he advocates for adults with disabilities. By night, he mentors at-risk children, typically from single-parent homes.

"We basically focus on self-care," he said. "We focus on building self-confidence."

That happens during a pick-up game of basketball or on a field trip to a park. It happens when playing video games or going to watch a football game. Sometimes it's even as simple as attending a child's sports game or buying them lunch at school.

"Sometimes you don't even need money," said Stroud, a married father of two. "Just giving 5-10 minutes of your time can affect change. It's a game changer when a child can look in the stands and say, 'He came for my game.' You can see their behavior change and their grades improve when they have that outlet. It's amazing."

For the activities that do require funds, Stroud takes care of that. He donates half of each paycheck he earns working at Community Options to the kids and his foundation. When Big Homie Lil Homie started, Stroud was the lone mentor. Now there are nearly 50.

"My son [Quentin] has been going for a couple years," said Alexandrina Davis of Columbia, South Carolina. "He started when he was 6 years old and he'll be 9 this year. It's a tightknit community we have. We say good morning to each other on a chat, and they have outings where he gets one-on-one time with Jamal or other Lil Homies. Quentin is very hyper and head strong, but when he's with Jamal, he's calmer and seems in a happier place.

"And they don't just check in on your child. They check in to help the parent. If you have other children, they check in on them. They embrace your whole family."

According to the nonprofit organization iFoster, more than 420,000 children each year spend time in foster care and 20,000 of them age out of the system each year without having found a family or a support system. Now Stroud counts himself among just 13 percent of the population to have an advanced degree.

"He's very inspirational," said Janelle Robinson, Ph.D., assistant professor and counseling program coordinator at LR. "When he tells his story, what he's gone through and overcome, that in and of itself is inspiring. Then when you start looking at the statistics for younger black people and you see someone who has defied that, it's exciting."

Since graduating, Stroud has returned to Lenoir-Rhyne as a guest speaker for Black History Month and to participate in monthly townhall discussions related to diversity and systematic oppression.

On Oct. 9, 2020, Stroud's work with Big Homie Lil Homie was recognized when he was invited to appear on "The Ellen Show" to talk about the program.

"The experience was truly amazing," he said. "I didn't know I was going to be on the show. They told me I was going to do something for their website."

Instead, he was surprised by guest host Tiffany Haddish and brought on stage to talk about Big Homie Lil Homie, where he was then presented with a $10,000 check for the foundation, on behalf of Shutterfly, to continue supporting Columbia youth.

"My son was super excited to see his mentor on TV," Davis said. "He's built this program from the ground up, and he's very deserving. He puts a lot of time and money into this program. It's not free to drive around town, pick up children and take them to eat or play or even just spend time with them. It takes time from his children and wife and whatever else he'd like to do."

Stroud said there were times when he easily could have wound up in jail or dead, and it's his mission to prevent other children from having the same experience.

"My favorite part is seeing the growth from beginning to end," he said. "When you see the children gain that confidence and start to believe in themselves, you can see that change in the way they walk and the way they talk."

Alumni Association Board of Directors names new board members

Macy Kennedy '22 is taking her ministry beyond the pulpit and into God’s creation. She has found a way to combine her love for the outdoors with her theological education.