THIRTY MINUTES DOWN. THIRTY TO GO.

That is all that stood between Lenoir-Rhyne’s men’s lacrosse team and a national championship. Unfortunately, it wasn’t meant to be as Le Moyne College stood tall down the stretch on a cold and rainy day for a 12-6 win, its sixth title.

However, it was a turning point for the Bears program and a lightning rod for the community.

“People still bring it up in the community,” said Myles Moffat ’21. “Losing wasn’t our goal, and it still stings, but that’s a part of sports. It was a great experience.” 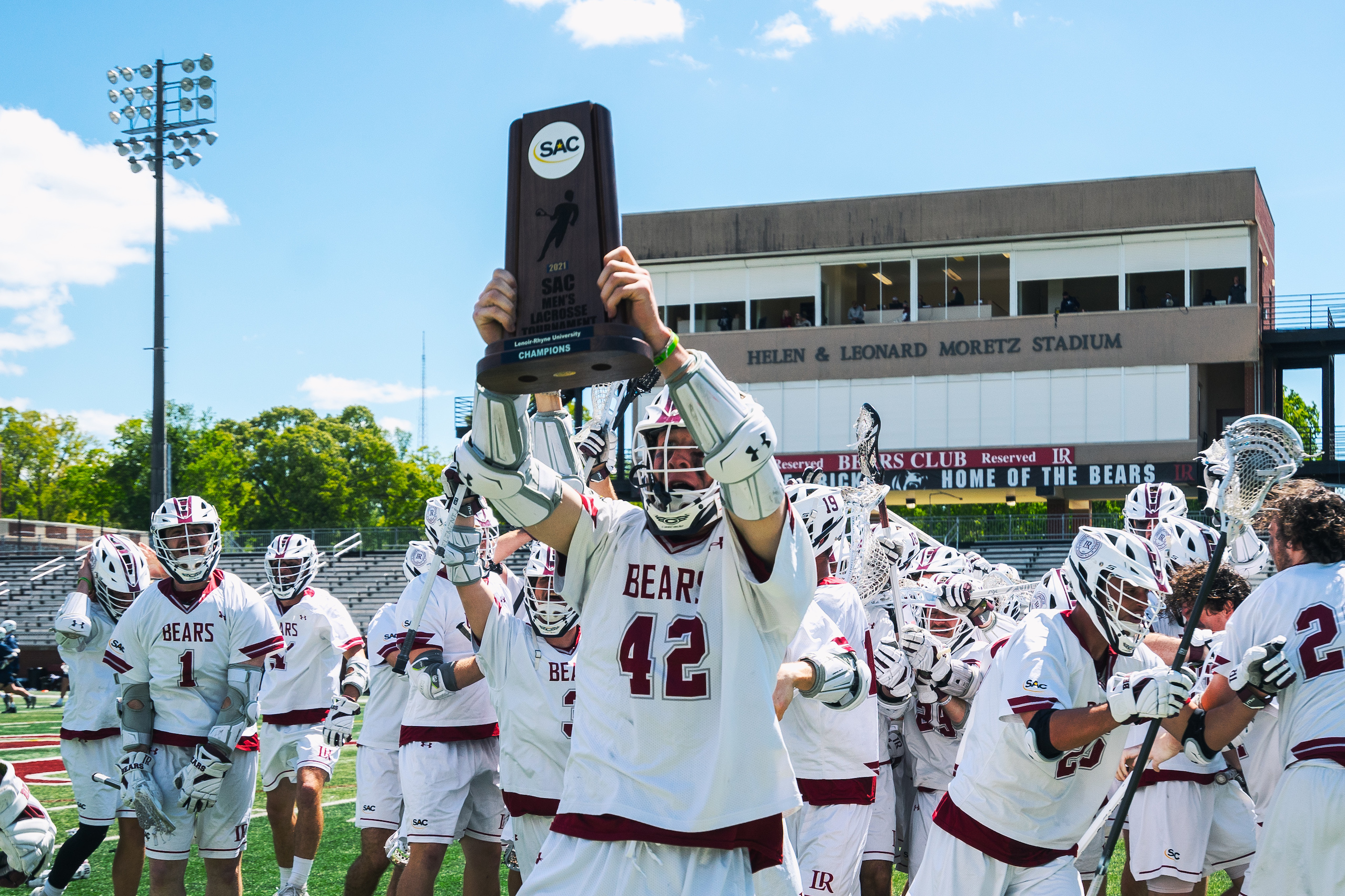 Only 11 years after LR’s program got off the ground, LR was one of the last two standing at the end of the season.

“It was unbelievable for everyone involved,” Men’s lacrosse head coach Greg Paradine said. “When you get to that stage and that environment, all the divisions are right there. It’s a type of festival because it’s the big stage. I was telling the guys it was a show, a production.”

From the community send-off at Moretz Stadium to the chartered flight to the police escort at the venue, it’s an experience that won’t soon be forgotten. The Bears rolled to a 15-2 record, secured the program’s second South Atlantic Conference tournament championship, second national semifinal appearance and first appearance in the title game. And it was clear from the beginning that all the ingredients were there.

“I told the team at our first meeting of the year that I thought they had the potential to win a national championship,” Paradine said. “I’ve never said that to one of my teams before, but I said that in order for that to happen, we were going to have to focus. With all the COVID restrictions and things the administration was asking us to do, our guys bought into it.”

What Paradine saw in them came to light in 2020. LR had jumped out to a 6-1 mark, with its only loss coming to No. 6-ranked Belmont Abbey, but along the way, it tallied back-to-back wins over No. 3-ranked Adelphi and No. 1-ranked Limestone.

COVID-19 forced an early end to the season, but the NCAA’s revision to eligibility rules allowed all student-athletes to receive a grace year and earn one more season of eligibility.

That experience and chemistry came to light early in 2021 with wins over ranked opponents Belmont Abbey and Limestone as LR jumped out to a quick start. Add in a win over No. 12-ranked Queens University and, before you know it, the Bears were red-hot at 9-0.

I told the team at our first meeting of the year that I thought they had the potential to win a national championship.

“Our defense was top-notch,” said Moffat, who was third on the team with 49 goals and second with 78 points. “Our goaltender is one of the best in the country, and our offense was explosive. We were a very fast-paced, explosive team.”

The Bears suffered a setback in a 16-15 nail-biting loss to rival and No. 6-ranked Wingate, but that refocused a lethal LR squad heading into the postseason. They rebounded with convincing wins over Lincoln Memorial and Mars Hill to cap the regular season before downing Tusculum and earning revenge on Wingate, which had moved up to No. 3 in the nation during the SAC championship.

“The SAC championship was huge for us,” Moffat said. “We hadn’t won one since 2016. We had a couple of regular season titles but always seemed to fall short in the championship. Winning that was big for us and really helped us kick it into gear.”

LR faced a tall order in the first round of the NCAA tournament against a skilled University of Tampa team, but a turnover and an overtime goal by sophomore Colten McCracken kept the Bears rolling. And another victory over Wingate in the semifinal punched LR’s ticket to the big show.

Junior Will Canata’s 17th goal of the season put LR on top early, and 2021 graduate Eric Dickinson’s hat trick gave the Bears a 4-2 lead in the second. It was 5-5 heading into halftime against Le Moyne, but the Dolphins took advantage of rain and cold weather that slowed the Bears to close it out down the stretch.

“It hurt because I feel like we had the team to win,” Paradine said. “With decent weather, I think we could have beaten Le Moyne, but our returners want to get back there. They’re champing at the bit.”

LR returns 39 of 47 players from that title game and welcomes a heralded crop of recruits poised to help the Bears attempt a repeat run.

“We’ve got some big boys coming in on defense,” Moffat said. “I’m excited about this class and to see what they can bring. One of the exciting things about going to the national championship game is that it brings a higher level of recruits who want to win a national championship. Hopefully, this group can help us do that”.

As part of a spring break study abroad trip to Italy, students were immersed in a once in a life time cultural experience to meet those in the health services and mental health fields abroad.