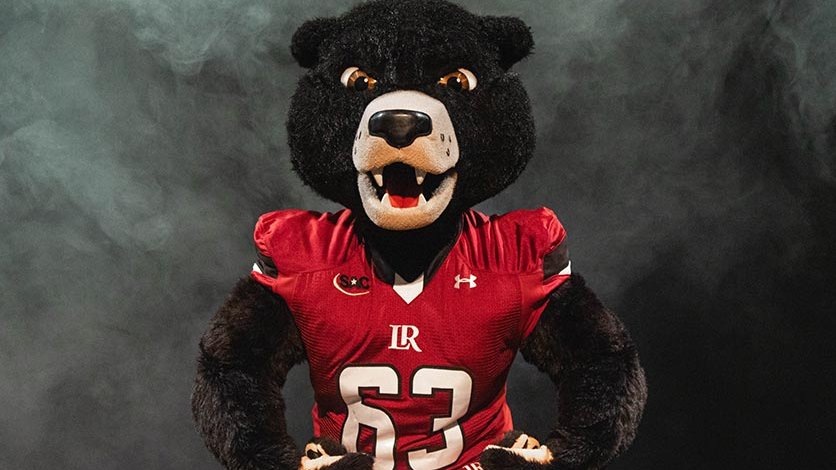 The Bears name was adopted in 1924 after a sports reporter described the baseball team charging out of the dugout like mountain bears. The original Joe Bear was introduced to campus in 1927 as a live black bear, the

After a recent hibernation, Joe Bear, Lenoir-Rhyne University's mascot, has appeared with a fresh look, allowing him to recharge and he's ready to cheer on the Bears in the classroom, on the field, and in the community.

A 60-second video revealing the new mascot costume shows a straight profile from forehead to snout, a toned physique, and a Lenoir-Rhyne jersey. Throughout the year, Joe's updated wardrobe will include athletic gear and general workout apparel. The costume version of Joe Bear, which will be portrayed by an LR student, serves as a University ambassador and entertainer at campus and off-campus community events.

"Joe Bear is an important part of the Bear family, and we want him to embody school spirit," said Cat Niekro, vice president for institutional advancement. "He has strong ties to our Lenoir-Rhyne history and resonates pride and tradition for alumni, current students, and visitors."

Plans to redesign Joe Bear began earlier this year when LR Athletics and University administrators decided to update the mascot costume. The costume was made by Street Characters.

The Bears name was adopted in 1924 after a sports reporter described the baseball team charging out of the dugout like mountain bears. The original Joe Bear was introduced to campus in 1927 as a live black bear, the symbol of the college athletics mascot. During fall 1935, Joe Bear III arrived to campus and coincided with the introduction of the college fight song. Finally, in 1961, LR's student government association decided, by popular vote, for a student to play the role of a mascot. On the Hickory campus, various Bear statues, including a Bear mascot carved from a tree, welcome visitors and serve as an additional source of Bear pride.

The community is invited to meet Joe Bear "Between the Bricks" this Wednesday, Aug. 28, at 6 p.m. for 828 Day, a free, family-friendly event celebrating LR Athletics. Learn more about 828 Day.