Charles 'Lonnie' Fox III has always been interested in a career studying wildlife, and with Lenoir-Rhyne, he's had the opportunity to put that interest into the field, gaining experience as a field researcher and conservationist.

As an intern with the North Carolina Zoo in Asheboro, Fox studied chimpanzee behavior.

"There isn't a class that caters towards field observation, so it's something I had to learn by myself," Fox said. "Dr. (Carly) York gave me ethograms she has used in her research, and I adapted one for my needs, which catered more toward animal behavior. Are they walking around, eating, head nods, body rocking, any kind of configuring lips, anything out of the ordinary?" 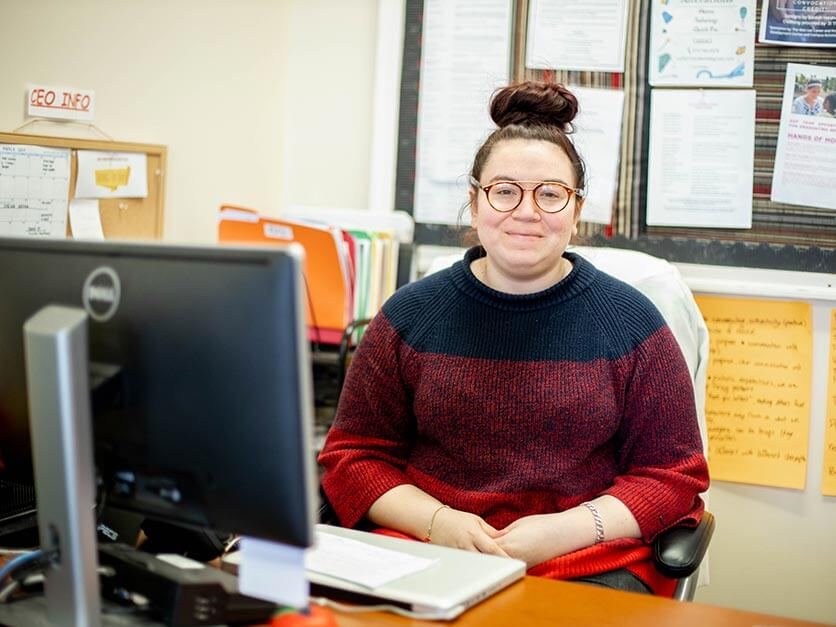 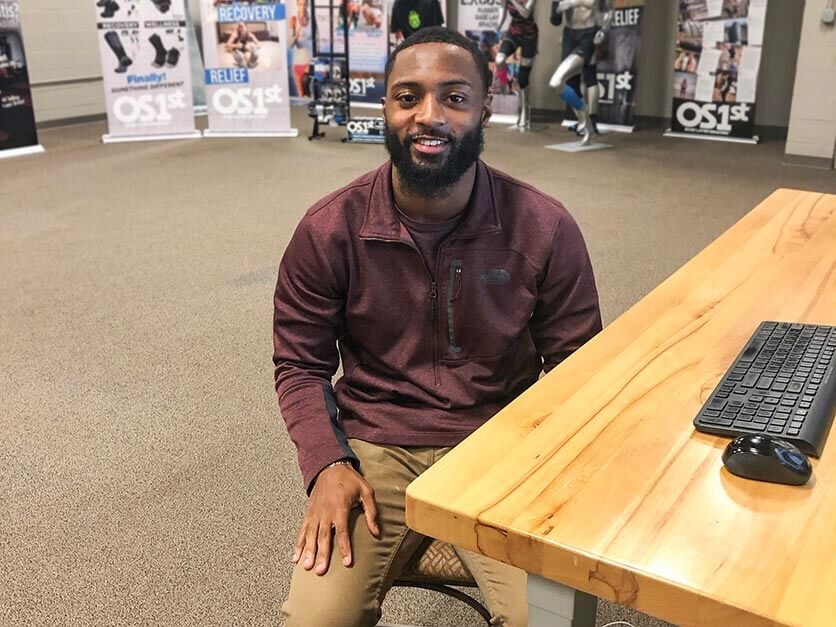 Lenoir-Rhyne students put their education into action through internships gaining real-world experience and earning job offers in their chosen careers.

Fox studied one chimpanzee, Kendall, who had appeared on "The Oprah Winfrey Show" and participated in Pepsi's Play for a Billion contest, but now resides at the North Carolina Zoo.

He recently spoke with a Harvard professor in the organismic and evolutionary biology program who is changing the focus of his research toward great apes and was interested in Fox's experience with chimpanzees in Asheboro.

A 21-year old Statesville, North Carolina native, Fox is working towards completing his degree with a major in biology. He said the ultimate goal is to continue his research, while pursuing an advanced degree.

Dorien Dickey turned an encounter at a job fair sponsored by the campus career center into an internship opportunity that provided him with experience and new skills.

"ING Source was at the job fair," he said. "After the job fair, I stayed in contact with them. I was persistent as I would show up at the ING Source office rather than emailing or calling. I found out that having a face-to-face conversation is the best form of communication when possible."

ING Source is a Hickory-based company that develops compression sleeves and support products for injuries commonly suffered in athletics.

With ING Source, Dickey served as a marketing intern writing press releases, working on projects directly with clients, and learning the ins-and-outs of marketing and social media in the sports industry.

"The experience at ING Source was outstanding," he said. "I got to work with the brand OS1st, and I was treated with the utmost respect even though I was an intern. I was given the flexibility to put my own twist on projects, and I feel like I helped them as much as they helped me because I was their first-ever intern."

While at LR, Dickey was a student leader for the NCAA Apple Training Institute, an orientation leader, student newspaper reporter, and chapter president for the Omega Psi Phi fraternity. 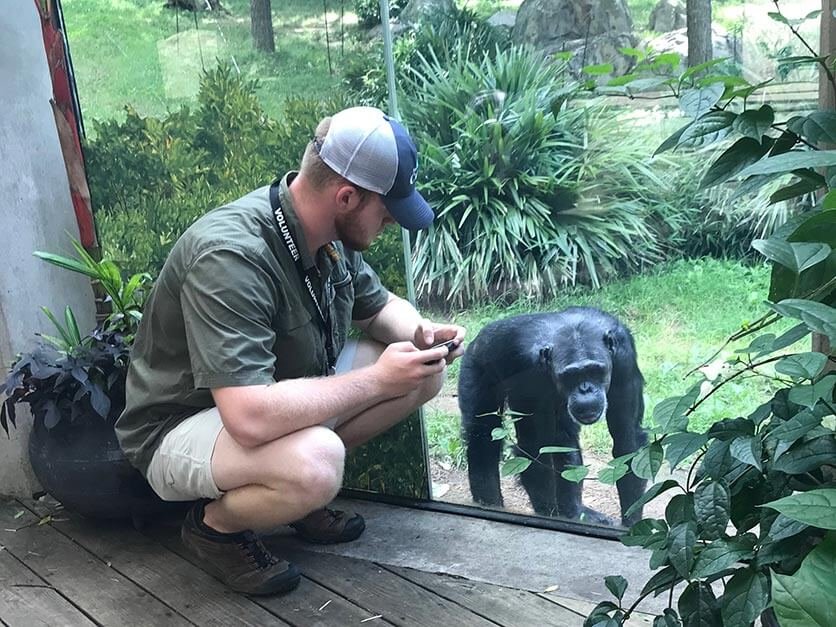 Fox studied the zoo's chimpanzees providing the zoo with information on their behaviors and interactions within the group.

Yasmine Arevalo didn't have to leave campus to gain experience for her desired profession.

The senior business management and entrepreneurship major interned at The Alex Lee Career and Professional Development Center at Lenoir-Rhyne.

"It was amazing, and I learned a lot," the Hickory native said. "I was under time pressure because one of my main projects was to organize the fall Etiquette and Networking Dinner that was held here at LR. ... I was also in charge of the catering and choosing the meals, as well as helping Megan Spivey (an LR alum), who was our etiquette speaker."

A self-described introvert, Arevalo hopes to work in human resources one day, and she feels this experience will help her reach that goal.

"A lot of things I did for my internship really made me get out of my comfort zone, which is something that worried me," she said. "I want to be in (human resources) and a huge part of that is being able to talk to employees and a bunch of people.

"The whole reason for this internship is to start becoming comfortable with the uncomfortable and that's what I did."

Sophia Aguilar sought an enriching and challenging environment when she chose to attend Lenoir-Rhyne, and she found what she was looking for.

An international student from Venezuela, She is a senior double majoring in international business and marketing; and a member of the women's tennis team

In the business sector, she's challenged herself with an internship with a supermarket chain headquartered in Panama City, Panama called Orgánica, which sells organic products that promote a healthier lifestyle. She also interned with Merchants Distributors Inc., a wholesale distributor of food and non-food items to grocery stores, which is headquartered in Hickory.

"I learned a variety of different skills that I can now feel confident about and trust," she said. "I had the opportunity to explore areas of digital marketing that I had no knowledge about, specifically in the grocery shopping industry.

"Today, I have more of a shaped vision on what I want to do in my future professional career. I have experienced marketing on different levels, all with very similar goals, which has allowed me to look at it from an international business standpoint."

While at LR, Aguilar has also been involved in the Charles M. Snipes School of Business and Economics Honors Program, in addition to serving as an assistant in the information technology department and as a social media ambassador for marketing communications.

Organizing the City of Hickory sesquicentennial

A December 2019 graduate, Sparks first interned with the Hickory Young Professionals in fall of 2018 before taking an internship with the communications department for the City of Hickory.

"From Day One, I was involved in everything as if I was an employee," Sparks said. "Truly, I learned more from my supervisors and the internship than I ever could have from a classroom. They allowed me to take on projects such as event organizing, tabling and representing the city for different events, writing media releases, composing social media campaigns, and attending meetings."

Following the internship, the City of Hickory offered Sparks a year-long position to help organize and promote the city's sesquicentennial celebration, as well as other projects.

"Although my degree was not specifically in communications," Sparks said. "I feel that the things I've learned and experienced in my internship not only aided in a better understanding of what I learned in my undergraduate program, but have also given me the opportunity to learn a whole different skill set on top of my degree and helped me discover that I truly enjoy working in a local government field."

Sparks graduated with a degree in marketing and business management.

While on campus, she was involved in the Campus Activities Board where she served one term as president, as well as serving two years on Homecoming Committee as events chair and then committee captain. She was also involved in Greek Life on campus.

Finding success on the field and in the career field

Dawson Sigmon is used to success wherever he goes.

As a member of the two-time South Atlantic Conference champion football team; and a thrower for the men's track and field team, the Morganton, North Carolina native has seen his share of triumph.

He's taken that winning mentality into the business sector as an intern with Transportation Insight in Hickory.

"I was the first intern they've ever had for client development," he said. "I went in and created a project for future interns from LR, making cold calls and sending out emails to potential clients to set up meaningful interactions."

Sigmon – a double major in business finance and entrepreneurship -- interned over the summer, but Transportation Insight was so pleased with his work, they brought him back as a temporary employee over Christmas break and are saving a position for him for after he graduates – next year.

Transportation Insight has also put him in touch with Gray Matter Exchange in Brighton, Michigan, who brought him on board as a part-time representative to develop client relationships in the Southeast.

"My experience with Transportation Insight was outstanding," he said. "Everyone there was accepting of my part within the company. They were willing to help no matter what the case may be."

Sigmon was put in contact with his internship by Dr. Jamie Conrad, Coordinator of Experiential Learning and Outreach.