From Hickory to the Hill: Alumna Builds Career in Washington

Virginia Hinzman '19 has always trusted her intuition. In fact, it took just one visit to Lenoir-Rhyne's campus to know it was the place for her.

"During the tour, I just kept seeing all these great things and I thought, 'Oh, I like that,' and 'I could be interested in that,' shared Hinzman.

"My mom remembers when we got back in the car after our tour was done, I said 'Okay, I want to go here.' And she said, 'Whoa, we haven't even seen the other colleges you're interested in. We haven't talked about scholarships and all that stuff!' It was just one of those moments where you get this gut feeling, and I've always relied on that gut feeling in life," she said. 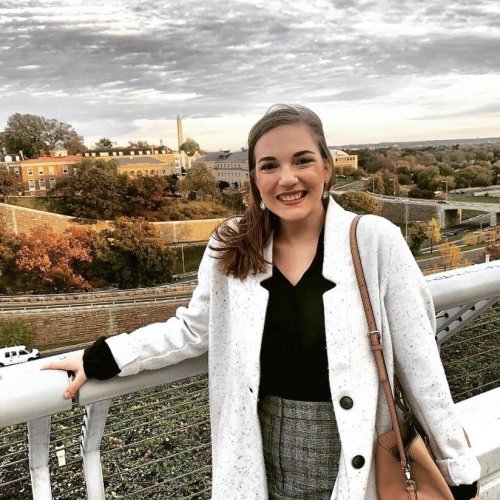 That intuition helped Hinzman, who studied political science, begin building her successful career. During her senior year, Hinzman took a leap of faith and moved to Washington, DC to participate in the Lutheran College Washington Semester (LCWS) program. Hinzman lived and worked in the capital, while interning at a non-profit foundation based in Alexandria, Virginia.

That internship would eventually lead to a full-time job offer with the organization.

"I think Lenoir-Rhyne had a huge in making that happen. I was there because of the LCWS program. I was prepared because of my classes," said Hinzman.

That position segued into a job on Capitol Hill for U.S. Sen. Deb Fischer of Nebraska where Hinzman worked in scheduling. After a little more than a year, a peer recommended her for a job with U.S. Sen. Marco Rubio of Florida. Though she wasn't sure she was ready for the change, Hinzman once again took a chance and applied, and is now Rubio's director of scheduling.

Hinzman manages all of the senator's appointments, including coordinating Rubio's frequent travel from Miami to DC, as well as his day-to-day agenda, making sure he remains on schedule. Given the nature of work as a senator, this is no easy task.

"I sometimes have a lot of people pulling me 50 different ways, and my time at LR taught me to stop, breathe, chill out, organize my thoughts, organize what needs to get done first, and then proceed with that triage that I built," said Hinzman. "LR taught me to ask detailed questions and get the answers instead of just sitting there stressing out about it. I learned to use my voice and ask what is important."

According to Hinzman, LR provided her with a solid foundation, giving her the confidence to continue stepping out of her comfort zone.

"I never felt like I couldn't try a new class, learn a new skill, apply for an internship or apply for a job. I always felt like I had a strong support system," she said. "Because I'm so type-A, I was always questioning 'what if it doesn't go according to plan?' Everyone at Lenoir-Rhyne, from my peers to my professors to people in the career center, would just say, 'The worst they can say is no. And you'll still be you at the end of the day, and you'll still be great, and we'll still love you and support you.' And that, I think, really transformed the way I looked at my career, my life and moving to DC."

During her time at LR, Hinzman was active in Kapa Delta sorority, was a Bear of Distinction – one of the university’s admissions student ambassador – and was part of the inaugural class of Engaged Scholars, a program that helps students connect academic achievement with leadership development.

"I would always tell people, LR is what you make it, and if you want to come and have an amazing time and do all these amazing things, you can do that here," shared Hinzman.

From Hickory to the Hill: Alumna Builds Career in Washington

Virginia Hinzman '19 has always trusted her intuition – it took one visit to Lenoir-Rhyne's campus to know it was the place for her and that same intuition helped her begin building her successful career in politics.